Ben Askren says he 'let the world down' by suffering a first-round knockout defeat against YouTube star Jake Paul.

END_OF_DOCUMENT_TOKEN_TO_BE_REPLACED

As an experienced combat sports pro, ex-UFC star Askren was the bookies' favourite going into the clash - despite having no boxing pedigree.

Askren's grounding is in wrestling rather than boxing, but he was still expected to pick up the win over the relatively inexperienced YouTuber.

UFC president Dana White even bet $1 million on Askren picking up the win.

What transpired came as a big surprise.

During the first round of the fight, a swift one-two from the 24-year-old Paul knocked Askren to the mat. Although the latter made it back to his feet, he was deemed incapable of continuing by the referee.

END_OF_DOCUMENT_TOKEN_TO_BE_REPLACED

Speaking to reporters after the bout, Askren was regretful. 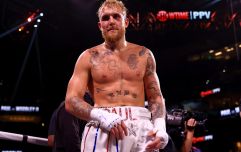 END_OF_DOCUMENT_TOKEN_TO_BE_REPLACED

"I didn't let the MMA community down, I let the world down. People f***ing hate Jake Paul and they wanted to see me make him miserable and I didn't do that."

The 36-year-old was then asked which MMA star he would put forward to face Paul in the future.

"I would love Tyron [Woodley] to whip him up," he said.

"Tyron wants to fight Oscar De La Hoya, but I would love for Tyron to fight Jake Paul. I mean, he's a significantly better boxer than I am."

Another name Jake Paul has been linked with is Conor McGregor.

'The Notorious' is set to go up against Dustin Poirier in a trilogy fight later this year, but he is no stranger to boxing after previously facing Floyd Mayweather.

If he does go up against Jake Paul, Ryan Garcia doesn't think McGregor would be able to knock the YouTuber out.

"Conor McGregor's not that good of a boxer. His punches don’t even look good."

"I'll bet a hundred thousand dollars he won't knock out Jake Paul - you can mark it down right now."