You can't not love the guy.

Graduation is special moment in anyone's life. The official end of your degree, for many the moment that marks the end of their education life. 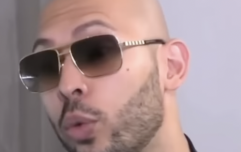 Andrew Tate responds after being kicked from social media sites, says clips are 'taken out of context'

END_OF_DOCUMENT_TOKEN_TO_BE_REPLACED

Pictures are obligatory. Wearing the gowns, holding your certificate, parents behind you smiling. A picture that will take pride of place on the mantelpiece.

Now imagine your proud graduation pics, but with Jack Black posing with you. That's what a group of students in the US will have to treasure for the rest of their lives after the comedy/music/acting legend rocked up at their graduation.

LA photographer @visionarydaniel captured the moment that Mr Black posed for pictures with the grads, with Black even giving direction as to how and where they should pose in order to get the best lighting from the sun.

Daniel says in the post caption: "thank you! @jackblack literally a legend"

He explains in the video: "We found Jack Black during a graduation photo shoot, he agreed to take pictures!"

And the pictures are sick as well.

END_OF_DOCUMENT_TOKEN_TO_BE_REPLACED

Safe to say that people were full of love for the Tenacious D vocalist in the comments.

One user wrote that "he's one of the very few good people left in the world," with original poster Daniel agreeing, writing: "Agreed, such a kind soul"

Another commented: Love this!!! @jackblack is such a cool and amazing guy! You will never hear a bad thing about him."

A third simply said: "Jack is an angel I'm convinced."

The video on TikTok has gathered over 560,000 likes and been viewed 2.4 million times.

And just in case you weren't convinced about how much of a legend Jack Black is, then here's the first time he went viral on TikTok this week.

Jack Black seeing a fan absolutely crush one of his songs is the best thing you’ll see today... https://t.co/4EIsP3hKfX

A body of positivity.

popular
Incredible case of the only known individual whose parents were two different species
Multiple fatalities after planes collide mid-air over airport
Andrew Tate banned from Instagram and Facebook
The JOE Friday Pub Quiz: Week 308
Former Playboy Bunnies detail what it was like having unprotected orgies with Hugh Hefner
Footage emerges of Andrew Tate getting knocked out during kickboxing bout
Court hears cringeworthy poems Ryan Giggs wrote to his ex
You may also like
News
Time traveller’ claims to know exact date Queen will die
Life
Mum gives 5-year-old son at-home drills with backpack to prepare him for school shooting
Life
TikTokers are utterly convinced there is a secret zombie apocalypse going on in China right now
Life
Viral TikTok baker explains why we've all been peeling bananas wrong
Life
Woman claims God gave her an STI and calls it a 'blessing'
Next Page