32 years ago, 96 football fans went to watch a match, and never came home

END_OF_DOCUMENT_TOKEN_TO_BE_REPLACED

In an attempt to ease overcrowding, police ordered exit gate C of the stadium's standing-only central pens to be opened. Rather than alleviate the issue, it led to a further influx of people into the area.

This overcrowding led to a crush, and to the deaths of 96 people. It is the highest death toll in British sporting history.

The aftermath of this tragedy has shaped much of British football and culture in the three decades since, not just with the introduction of new safety standards in football stadiums, but also the distrust and suspicion of the media and authorities that resulted from the coverage in the following weeks.

For Tony Evans, a journalist and Hillsborough campaigner who was in the stadium that day, the memory of what transpired, and the mistakes made by police, are as clear today as they were then.

"I was sitting about 18 rows back, around by the 18-yard line, and it quickly became apparent that something serious had happened," he said.

"There's a guy who walked out of the Leppings Road end and he was holding his arm up, except it was broken at a right angle. 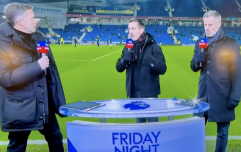 END_OF_DOCUMENT_TOKEN_TO_BE_REPLACED

"It was a lovely sunny day and there was just a line of police standing there. A line of police. As if they were stopping you going out getting into the real world again.

"And then there were people lying on the floor. I thought... Stepping over them and thought 'strange time to be sun bathing' and then I realised they were dead. What do you say to that?

"After that I went up to a policeman and said to him 'how many?' and he just looked at me, but didn't say a word. But he sobbed. Didn't move but he sobbed and he just stood there. At that point, I ran up the hill.

"I went up to a policeman and said: "How many?" He just looked at me, didn't say a word and sobbed."

If you want to understand what Hillsborough means to the people of Liverpool, and why they boycott certain publications, watch this account by Tony Evanspic.twitter.com/NVbK3RLitL

END_OF_DOCUMENT_TOKEN_TO_BE_REPLACED

For the survivors of the tragedy and the family members of those who had lost their lives, the days following would end up being unimaginably painful, thanks in no small part to the coverage of the events in The Sun, who less than a week later, accused Liverpool fans of having caused the crush.

False allegations of theft and urinating on dead bodies were also published in the newspaper, which is now boycotted widely in the Merseyside area.

"On the Wednesday came 'The Truth'. The famous Kelvin MacKenzie story that said that we stole from dead bodies. We urinated on dead bodies and, you know, people wanted to molest a dead girl and that was... unbelievable," said Evans.

"Especially as by then, everyone had seen the footage. The people who were being criminalised there and being tainted were the actual heroes of it. Because while the police stood there and did nothing, fans from the Leppings Lane ripped down the advertising hoardings and turned them into stretchers.

"It was the classic, sort of, dehumanisation of people for political purposes. Liverpool was considered a rogue city.

On the topic of the now decades-long boycott of The Sun in the Liverpool area, Evans states that rather than being some co-ordinated campaign, it was simply organic, and that people naturally and instantly got behind it.

"The boycott was absolutely organic. It wasn't organised. There was no politician who stood up there and said 'Don't Buy The Sun' - it was a group of women in Kirkby who said, 'No. Enough'.

"It just spread like wildfire. People just refused. People were absolutely flabbergasted that a national newspaper could say this about such a large group of people.

"And to make it worse, this was probably the most publicly accessible tragedy ever. it was on film. What happened was on film. Everybody saw it.

"Yet, they could say this, and still people would believe it.

"They didn't want to believe that the police, the authorities, the government, the people who were supposed to protect them, had let them down."

In the years since, the people of Liverpool and the wider country have grown accustomed to police, authorities and the government letting them down, again and again.

But for the survivors, and the families of those lost it is the scale of deceit surrounding Hillsborough, and the secrecy regarding the official version of events for so long that lingers, and will continue to do so, for years to come.