Tommy Robinson has won an appeal against his contempt of court conviction and is set to be released from prison on bail.

END_OF_DOCUMENT_TOKEN_TO_BE_REPLACED

The former leader of the EDL had been jailed for 13 months after going Live on Facebook from outside the trial of a rape gang at Leeds Crown Court.

Robinson, real name Stephen Yaxley-Lennon, had pleaded guilty to a contempt of court charge but will now have another hearing after the charges were quashed today in the Court of Appeal.

The judges hand down their ruling 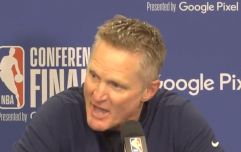 END_OF_DOCUMENT_TOKEN_TO_BE_REPLACED

Robinson's Facebook broadcast was judged to have potentially jeopardised the proceedings at Leeds Crown Court, by identifying jurors or the defendants' presumption of innocence, and was viewed more than 250,000 times.

The Lord Chief Justice Lord Burnett and two other judges quashed the finding and sentence, made in May, and ordered a new hearing of the allegation.

The judge said: "The appellant is granted bail and the matter of contempt at Leeds Crown Court is remitted to be heard again."

Their ruling agreed with the argument of Robinson's barrister that contempt of court proceedings should not have begun on the same day of his arrest, writing in summary: "Once the appellant had removed the video from Facebook, there was no longer sufficient urgency to justify immediate proceedings."

Operating under #FreeTommy, there have been concerted protests against Robinson's sentence.

Protesters descended on London to repeatedly demonstrate against Robinson's incarceration, joining with a pro-Trump protest when the president visited the UK.

Gerard Batten, the leader of UKIP, has compared Robinson to Nelson Mandela, and said on the BBC's Newsnight: "In the great scheme of things, when these events are played out, he will be seen as on the right side of a struggle between good and evil."

Speaking on the verdict, HOPE not hate chief executive Nick Lowles said: "Today’s decision by the court means that 'Tommy Robinson’ walks out of prison as a convicted criminal. Stephen Yaxley-Lennon, to give him his actual name, remains a far-right extremist and a violent thug.
"His appeal over the original Canterbury conviction for contempt of court has been thrown out, and his Leeds conviction will be reheard. This is a man who admitted to a serious crime and nearly derailed a major trial. Today’s verdict changes none of that.
"The man’s a fraud. He’s been silent about serious sexual abusers within the English Defence League, including one man given a 17-year prison sentence this February.
"With his convictions for fraud and violence, his brawling and attempted physical intimidation against journalists and others he disagrees with, he has shown utter contempt for justice and the rule of law.
"Far from being a martyr for 'free speech', his are the actions of a dangerous, narcissistic extremist attempting to unite the far right around his virulent Islamophobic agenda."
Advertisement