"Sexual predators have not been influenced by Snow White"

A relationship therapist has been praised for ridiculing the idea that the kiss at the end of Snow White could send out the wrong message about consent to children.

END_OF_DOCUMENT_TOKEN_TO_BE_REPLACED

Emiliana Silvestri was appearing on Good Morning Britain alongside dating historian Nichi Hodgson, as the two discussed the revamped version of a Snow White ride at Disneyland California. The ride has added the 'true love's kiss' scene at the end of the ride, leading some to question what this may teach young children about ideas of consent.

Hodgson said that Disney has a "moral duty."

She said: "They can be an ethical business if they want to be. They make billions every year from their films. Children watch their films from a very young age, and they are some of the first stories they imbibe.

However Silvestri responded with the point that it's not up to a cartoon to teach children about issues such as consent, and that it is much more complex than that.

Silvestri went on to say: "I think Disney is a form of entertainment and it's my job as a parent to teach my daughter about consent.

"I don't think Disney, an entertainment forum, should be responsible for teaching children about these issues. 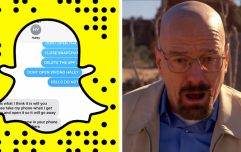 Guy's girlfriend and sister have the same name, and guess who got the wrong Snapchat?

END_OF_DOCUMENT_TOKEN_TO_BE_REPLACED

"I think its great we're opening up the conversation about consent, but people blaming Disney - a romantic kiss in the end of a movie, in a fantasy tale isn't the reason teenagers become confused about consent."

She explained that she has worked with both victims of harassment and those accused of harassment, and that Hodgson was "seriously underestimating children's intelligence and what children are capable of."

"I work as a therapist, and have worked with people on both sides, victims and those who have been accused of harassment and people who don't understand consent and boundaries aren't doing it because they watched a Disney film when they were younger, it's much more complex than that," Silvestri told the programme.

Her words were well-received by many it would seem, with viewers agreeing that it's a parent's responsibility to teach children about consent and relationships.

I think Ms Hodgson is wrong. Snow White was released in 1938, @Disney is an entertainment company and if you are using tv or the movies to teach your child morality, then you shouldn’t be a parent. #FairyTale #NotDisneysProblem

Concent is very important in the real world of course it is and we must have those conversations.....

but let's not forget that this is an innocent Disney movie where the "true love" kiss breaks the spell.#SnowWhite #Disney 🍎 pic.twitter.com/RSVVcsC3EL

As important as conversations around consent are, this does feel like it's missing the mark somewhat. Snow White probably isn't where we should be directing our anger in these debates and issues around sexual harassment and consent.

All in a day's work for GMB though I guess.

popular
Radio presenter tells Insulate Britain protestor cement grows on trees
Squid Game creator says Netflix 'never gave him bonus' despite show making £650m
Tommy Fury and Molly-Mae robbed of '£800k by experienced gang'
Boy, 7, mauled to death by dog adopted three weeks earlier
A definitive ranking of every swear word from worst to best
Joey Barton told to 'consider future' after making Holocaust comparison
Elon Musk becomes 'richest person to ever walk the planet' after huge deal
You may also like
Sex
Sex expert reveals most common mistakes couples make in bed
Life
The best time of the day to have sex, according to science
Life
Woman gets engaged to 24-year-old 'toy boy' despite huge age gap
Television
Identical twins from Perth get engaged to same man
Entertainment
Man forced to watch his girlfriend have sex with another man in brutal TV show
Next Page