Is this a step in the right direction?

Sainsbury's has banned the sale of fireworks ahead of the country's yearly Bonfire night celebrations that see the skies illuminated with colourful fire.

END_OF_DOCUMENT_TOKEN_TO_BE_REPLACED

All 2,300 stores will be removing all products from their shelves leading up to November 5 and instead the supermarket is urging people to choose non-pyrotechnic options like spinning wands and glow sticks.

Though fireworks are not without their criticisms, a spokesperson for Sainsbury's is blaming the ban on a "range of factors".

The company explained: "We regularly review the products available in our stores and we are no longer selling fireworks based on a range of factors.

"Customers can continue to choose from a range of seasonal products, such as glow sticks and light-up spinning wands."

The decision comes amid a Scottish survey that discovered a vast majority of people support a ban on fireworks.

Though this is a landmark announcement for such a major retailer, this isn't the first time fireworks have been banned. The Co-op has not sold these seasonal pyrotechnics for the past five years, which makes Sainsbury's the second supermarket to turn its back on Bonfire night.

Though Sainsbury's is the only supermarket to ban fireworks, other stores are choosing to sell so-called 'silent' versions instead. 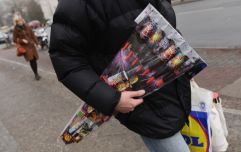 END_OF_DOCUMENT_TOKEN_TO_BE_REPLACED

Asda is one said supermarket, with a spokesperson saying: "We know that many of our customers love fireworks, but we also know that some customers and their pets don't like the noise, which is why this year we have launched a collection of low noise fireworks so that everyone can still enjoy the show."

Though Aldi will continue ahead with the sale, they have said that it, "understands the importance of animal welfare when celebrating [with fireworks] which is why our sales materials include reminders that pets should be kept safe indoors along with advice on how to make them feel secure."

popular
Dr. Dre shares unbelievable video of Eminem's skills to prove no rapper could beat him
'He completely satisfies me' - wife of disabled man hits back at trolls mocking sex life
Man tracked down and killed son's paedophile abuser live on TV
'Hey kiddo! This is your uncle ' - creepy moment OnlyFans star's relative finds her page
A definitive ranking of every swear word from worst to best
Former army sergeant who became porn star explains why she made career move
Elon Musk offers kid $5k to take down Twitter account tracking his plane
You may also like
Life
Rats filmed crawling over croissants at Sainsbury's
Life
Sainsbury’s to shut all stores for two days as a thank you to staff
Food
Guy finds Aldi version of Hula Hoops in branded multipack
News
Sainsbury's recall vegan lasagne - as it contains pork, beef and milk
News
Sainsbury's recall Medjool dates over fears of Hepatitis A contamination
Next Page