Residents of a tower block in London that set alight had been trying for three years to get the dangerous cladding from the building removed. It is thought that the cladding is similar to that used on Grenfell Tower. 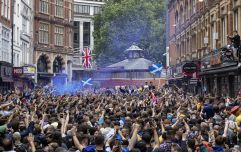 END_OF_DOCUMENT_TOKEN_TO_BE_REPLACED

Around 125 firefighter and 20 fire engines were rushed to the New Providence Wharf block, near Canary Wharf, on Friday morning, as part of the building went up in flames. The eighth, ninth and 10th floors of the building were ablaze.

Resident have been left in dismay though as they have been campaigning for the cladding, which is reportedly the same as that used on Grenfell Tower, which went up in flames in 2017, killing 72 people.

One former resident wrote on Twitter: "I lived in New Providence Wharf development for 4 years until last month - thinking of all the residents who have been campaigning to remove this dangerous cladding for years and hoping everyone is safe."

I lived in New Providence Wharf development for 4 years until last month - thinking of all the residents who have been campaigning to remove this dangerous cladding for years and hoping everyone is safe https://t.co/l9ECrltKqJ

Meanwhile another revealed that he had written a piece raising concern over the cladding years ago.

I wrote about this block More than two years ago. At the time the developer Ballymore had given leaseholders a two week ultimatum over the costs to remove this dangerous cladding. https://t.co/jmpMiHE5Lq

Grenfell United, the organisation set up by survivors and victim's families following the tragedy, have also commented on the fire. They said that the government had "completely failed" its target to remove all dangerous cladding from buildings by June 2020.

The Government promised to remove dangerous cladding by June 2020 it has completely failed its own target and every day that goes by lives are at risk. Today more people have lost their homes in another terrifying fire. 2/4

The fire at New Providence Wharf fire has now been extinguished, though the flat where it started appears to have been destroyed. The London Ambulance service said numerous people had been treated at the scene, though the extent of their injuries is yet to be revealed.

A spokesperson for the service said: "We have responded alongside the London Fire Brigade to a fire in a residential building in Poplar.

"They’ve treated a number of people, and remain at the scene, working with other emergency services."