She shared a number of images to her Instagram

In a surprising turn in Prince Andrew's long-running sexual assault allegations, his ex Lady Victoria Hervey has come out on social media to claim that the infamous photo of him and Virginia Giuffre is fake.

Lady Hervey, who was in a romantic relationship with the Duke of York back in 1999, took to her Instagram and posted a series of images supposedly calling the authenticity of the photo into question: 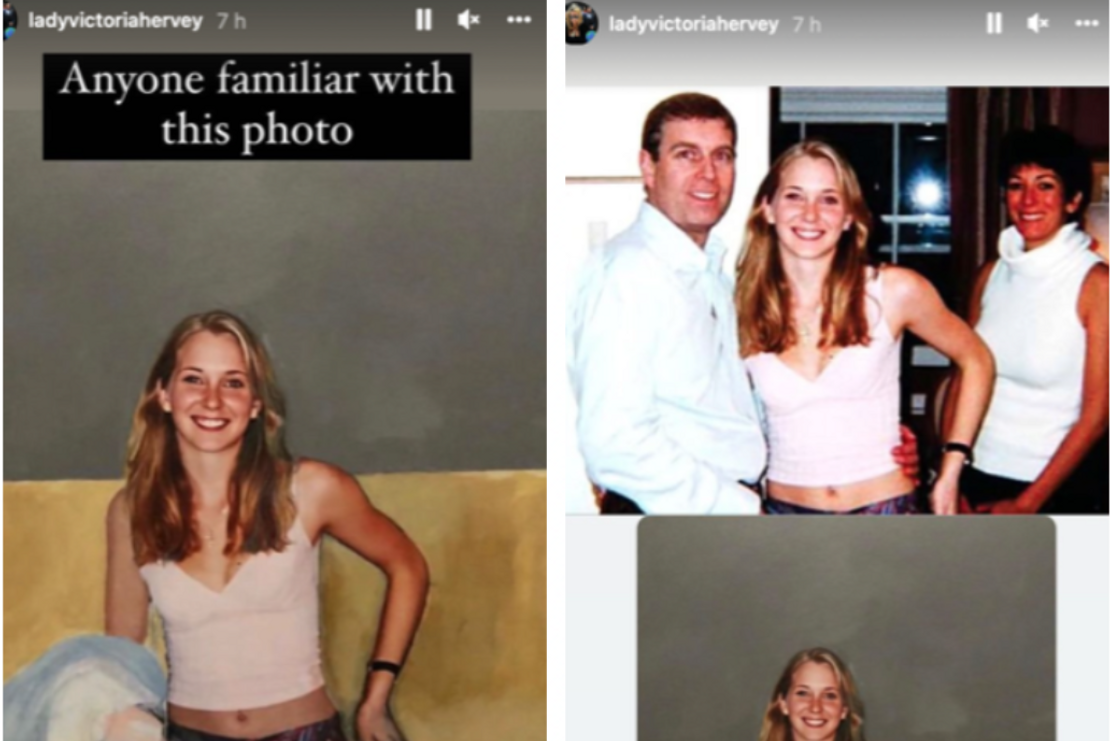 As she went on to say in her original Instagram story (now disappeared), she alleges that "a survivor of [Jeffrey] Epstein's told me it's an Irish body double that was edited in" to the photo taken in 2001.

END_OF_DOCUMENT_TOKEN_TO_BE_REPLACED

Adding more images to her story - including one that showed model Naomi Campbell - she attempted to point out the supposed body double in other pictures featuring a woman alongside Epstein, adding, "How did no one figure this out before is mind boggling" [sic].

However, many were quick to point out online that it is Hervey's own suggestions about the origins of the images - now thought to include Epstein's thumb - that seem more questionable than anything else:

My dearest Lady Victoria Hervey. We may need to rethink our strategy.

Prince Andrew's ex Lady Victoria Hervey, 44, claims the photo of the Duke with accuser Virginia Giuffre is a fake with an 'Irish body double edited in. She also says the Ghislaine Maxwell trial was a witch hunt and victim blames 🤡 pic.twitter.com/HzM3zZaWyK

One user even corrected her by claiming that the 'real' image she said was a picture of a woman "painted in the south of France from Naomi's birthday" was, in fact, a painting by Rina Oh - an artist connected to the Epstein case who reportedly helped bring women to his home.

Lady Victoria Hervey is wrong again. The picture is of a painting by Rena Oh, an admitted Epstein recruiter, and so-called ex girlfriend. @ohreallytruly https://t.co/uVuaz9NYKN

Of course, none of Lady Hervey's supposed 'evidence' is verified at this time and her track record for speaking on the case has been criticised as of late.

Posting a behind the scenes video from her appearance on Lorraine to discuss the Ghislaine Maxwell case back in January, the 44-year-old socialite and daughter of the 6th Marquess of Bristol, went on to say "I thought the age of consent is 17" and, reductively, that she doesn't think a "lifetime in jail for touching a girl's tit 2020 years ago" is a fair punishment.

The comments only caused further controversy, especially following Hervey's own suggestions that she was "used as bait" to "fish for girls" in an upcoming ITV documentary, Prince Andrew and the Paedophile.

Hervey has also been a vocal anti-vaxxer throughout the pandemic, recently telling her Instagram followers: "I will not participate in this Eugenics program disguised as a Pandemic. Do not allow yourselves to be bullied or gaslit. I personally know people who have died as a result from that shot which is NOT a Vaccine, adding, "people wake the F*** up!"