Kurt Zouma has reportedly pleaded guilty to kicking and slapping a cat after video emerged of the incident in February.

The West Ham defender barged through crowds outside the Thames Magistrates' Court on Tuesday where he appeared alongside his brother younger brother, Yoan Zouma.

A lesson from West Ham's @KurtZouma on how NOT to arrive for a trial....#WHUFC pic.twitter.com/uIhNpg2xgU

The pair are being prosecuted under the Animal Welfare Act in an investigation being led by the Royal Society for the Prevention of Cruelty to Animals (RSPCA). 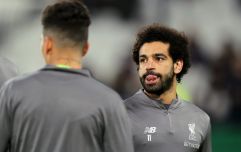 END_OF_DOCUMENT_TOKEN_TO_BE_REPLACED

Yoan, 24, is alleged to have filmed the incident and is accused of aiding, abetting, counselling or procuring Kurt Zouma to commit an offence.

Kurt, 27, is accused of causing unnecessary suffering to a protected animal on 6 February by kicking it in the abdomen and slapping it on the head.

Two cats belonging to Zouma are still under the care of the RSPCA.

After a video emerged of the incident, Kurt issued an apology, saying: "I want to apologise for my actions. There are no excuses for my behaviour, which I sincerely regret.

"I also want to say how deeply sorry I am to anyone who was upset by the video. I would like to assure everyone that our two cats are perfectly fine and healthy.

"They are loved and cherished by our entire family, and this behaviour was an isolated incident that will not happen again."