Sunday evening was a memorable and emotional one for those in attendance at Old Trafford Cricket Ground.

Although the sight of people enjoying themselves at One Love Manchester was a welcome one after the recent terror attack on the city, thoughts of the 22 that lost their lives that night were never far away.

END_OF_DOCUMENT_TOKEN_TO_BE_REPLACED

Katy Perry was one of a number of world-famous artists to take to the stage, but it seems many people watching the event missed the significance of her specially-designed outfit for the evening.

As pointed out by Yahoo, the 32-year-old, who performed hits Part of Me and Roar during the concert, wore a printed turtle neck which featured the pictures of the victims of the attack.

The event was organised by Ariana Grande, whose concert in the city on May 22 was targeted by a suicide bomber.

After she closed Sunday night's show with a haunting rendition of Somewhere Over The Rainbow, there have been calls for the 23-year-old to be granted the freedom of the city on social media. A petition has also been set up asking for her to be honoured in this way. 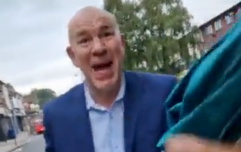 END_OF_DOCUMENT_TOKEN_TO_BE_REPLACED

'Ariana Grande has inspired people up and down the country with her selfless acts of kindness,' the petition's creator, Matthew Duggan, explained.

'She didn't need to return to Manchester but tonight she did and brought the nation to tears and for that I feel she should be granted Freedom of the City of Manchester.'

popular
Robin Williams' wife shares reason why he killed himself
‘Time traveller from 2090’ warns humans of worst event in history in coming days
Fans shocked by Tommy Lee's extremely X-rated post on Instagram
Woman arrested after husband caught her on video allegedly using drain cleaner to poison him
Groom shocks wedding by playing video of his bride cheating with her brother-in-law
Antonio Conte 'banishes' four Tottenham players from first-team
Emergency service workers took photographs of Kobe Bryant’s body 'for a laugh’
You may also like
Sport
'Empty Old Trafford' trends as Man Utd fans look to send Glazers a powerful message
Travel
This British city has just been named ugliest on the planet and we can't see why
Music
Andy Burnham is DJing in Manchester again soon
News
Manchester bus crash: One dead after double-decker crashes into group of pedestrians
News
Boy, 14, stabbed to death 'defending' mum from 'ferocious' knife attack
Next Page