The woman who was attacked by a jaguar while posing for a selfie has asked for the zoo to upgrade their safety systems.

In a zoo near the United States city of Phoenix, Arizona, the woman who asked to only be identified as Leanne decided it was a wise idea to lean over a barrier as the predators stalked nearby. A female jaguar attacked her, causing injuries to her arm.

"The black jaguars were up against the fence and we happened to be walking by and we said: 'Hey let's get some good pictures'," Leanne told CBS News.

"I was in the wrong for leaning over the barrier. But I do think that maybe the zoo should look into moving their fence back.


"Anybody can reach out. I'm not the first, and if they don't move the fence, I'm probably not going to be the last." 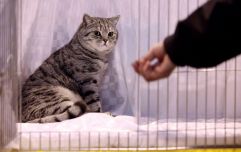 END_OF_DOCUMENT_TOKEN_TO_BE_REPLACED

Wildlife World Zoo has since confirmed that the jaguar responsible was not put down, as is always the risk with these incidents, and urged onlookers not to lean into enclosures for photographs.

"When people do not respect the barriers, there's always a chance that there might be a problem," said zoo director Mickey Olson.

Leanne is certainly repentant and vowed never to lean over carnivorous cats for a selfie again.

"I never expected this. I feel like we're all human, we make mistakes and I learned my lesson," she said.

You may also like
Life
Lonely at Christmas, one man and his loving dogs
Entertainment
Furst Dates: Going speed dating with dogs
Life
How to keep your dog safe during a heatwave
Entertainment
There is a Dog Cosplay event coming to the UK, if you want to dress your dog up as Iron Man or Darth Vader
Entertainment
You can buy beds for your pets shaped like the Iron Throne
Next Page