Airports are still a mess, motorways will be the busiest they've been in eight years... and train travel will be challenging

The four-day working week might be commonplace for some lucky Brits trialing it already, but for the rest of us, we have to wait for the big bank holiday weekends.

This weekend we get two short weeks, with both Friday and Monday, being days off.

But amid this blessing, there's chaos. Trains, planes, and automobiles will all be impacted. And the weather? Mixed bag as well.

Here's what you need to know.

The weather could be pretty good... for some

END_OF_DOCUMENT_TOKEN_TO_BE_REPLACED

Temperatures are expected to hit 20C in some parts of the UK, but others could face a rather chilly start to the long weekend.

"Warmer weather is on the way for the start of the week, and we could even see 20C in the southeast. The general trend is for it to turn warmer with higher pressure increasingly likely through the week and into the following week," Aidan McGivern, a Met Office weather meteorologist, told the Mirror. 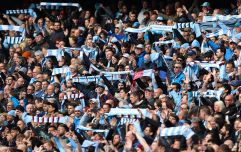 END_OF_DOCUMENT_TOKEN_TO_BE_REPLACED

Before we all rush to get our summer clothes out of the cupboard, it's worth noting that there could still be some dodgy weather on the cards elsewhere. The meteorologist said there is a chance of rain, but mainly in the west.

“Into Monday, low pressure becomes more and more erratic," McGivern said, "but it looks likely that northern and western parts of the UK will bear the brunt of any wetter weather.

“Low pressure is slowly progressing from the west bringing some rain in on Sunday, most likely in north-west of the UK, western Scotland, western England, and north Wales. Cold air remains in the far north with the potential for snow if that rain mixes with cold air as it approaches from the west.”

Ok, so don't panic, but according to RAC, this Easter weekend could be the busiest we've seen for eight years.

Motorways could see gridlock, the breakdown company warned, as a record 21.5 million drivers embark on journeys across the country.

Tracking research carried out by RAC suggests Good Friday will be the busiest day of the bank holiday road-wise, with 4.62 million trips planned. But Easter Monday (just under 4 million) and the Saturday and Sunday in between (another 7.2 million) will still be busy.

The worst spots for congestion include the M6 north between Junction 26 and 36, the M25 clockwise from Junction 8 and 16, and the ASO3 near Stonehenge.

It is just the Easter rush, or is something else clogging up the roads?

Well, Manchester City is playing Liverpool again on Saturday, and with train travel also disrupted (we'll get to that later) footy fans are being urged not to travel by train, which will add to numbers on the road. Climate protesters are also likely to be out on the roads, including Just Stop Oil.

Fear not, RAC has issued some advice for not getting trapped in traffic. Basically, go early, or go late. Motorists are being urged to hit the roads before 9am or after 7.30pm to avoid the worst of it.

And when it comes to avoiding breakdowns, RAC traffic spokesman Rod Dennis told The Sun: "A breakdown is much less likely if a car's oil and coolant levels, as well as tyre pressure and tread depth, have all been checked before setting out."

The train game: Plan ahead or plan on being late

Major engineering works are taking place across the rail network, meaning travelling by train could also be a little challenging.

No trains will operate to or from London Euston across the entire bank holiday weekend, National Rail has confirmed. Trains will terminate at other stations not in London (the Manchester Piccadilly train, for example, will terminate at Milton Keynes Central). So, football fans heading to Wembley for the FA Cup semi-final, or Man City fans going to the Women's FA Cup semi-final against West Ham, will struggle.

↔Please travel either side of the bank holiday weekend to avoid longer, busier journeys & some bus replacements

Other stations in London are getting work done too. No Southern services will run to or from London Victoria, with most trains diverted into London Bridge. There will also be no direct trains between London and Stansted Airport - you'll have to get a replacement bus instead.

There will be other train journeys affected across the UK, but you're best checking that out with National Rail.

Tube chaos in the capital

Tourists and Londoners alike can find the Tube hard enough to manage at the best of times, but this weekend planned engineering works are going to make things even more tricky.

No Piccadilly line trains will run to or from Heathrow Airport across the four days, as the line will be closed between Acton Town and Heathrow, and Rayners Lane and Uxbridge. TfL Rail or the Heathrow Express will still be available to use.

The Hammersmith and City line will be closed across the entire weekend. Most of the central section of the Northern line will also be shut on Friday and Saturday - between Charing Cross, Battersea Power Station, and Stockwell. The Northern line's Bank branch (which is already closed between Moorgate and Kennington until mid-May) will also be closed between Euston and Moorgate this bank holiday.

A lot of Tube journeys will be affected this weekend (Getty)

There will be closures on the District line between Tower Hill and West Ham, and between Earl's Court and Kensington Olympia, across the four days. On Easter Sunday, the line will be closed between Turnham Green and Richmond too.

And the airports, are they still a mess?

Airports have been a horror show since the start of the Easter school holidays. More than 100 flights have been cancelled every day in the last week because of staff shortages and covid absences. Some travellers have even missed their planes after spending hours queueing in terminals, the BBC reports.

Manchester Airport said long waits at security could continue, with holidaymakers queueing up to 90 minutes over the next few weeks. Heathrow, Gatwick, and Birmingham airports have also been hit by cancellations and delays.

Busiest I’ve ever seen it at Birmingham airport. 4am. Hundreds in line for security. pic.twitter.com/jBa6DHIKOC

easyJet and British Airways both said fewer flights were cancelled on Saturday, but passengers are still being urged to allow extra time for delays at the airport.