A Colorado man allegedly stole a police patrol car while intoxicated and then attended a domestic violence callout before leading officers on a high-speed chase.

END_OF_DOCUMENT_TOKEN_TO_BE_REPLACED

Jeremiah James Taylor faces eight charges, including aggravated motor vehicle theft, after the incident on Monday morning which began after he allegedly broke into an unstaffed Park County Sheriff's substation and stole a 2013 Dodge Durango.

The 33-year-old then drove to nearby Teller County after officials broadcast a domestic violence incident around 3.30am over the police radio.

Residents told KDVR that Taylor walked up to them, appearing drunk, identified himself as a deputy, and asked: "Where's the old man that's going to shoot someone?"

When police arrived at the scene around 10 minutes later, the stolen vehicle was seen leaving the property and Taylor was ordered to stop.

END_OF_DOCUMENT_TOKEN_TO_BE_REPLACED

Instead, he's alleged to have sped off at a "high rate of speed" leading police on a 110mph (177kmh) chase before crashing the Dodge into the woods.

According to an incident report obtained by DailyMail.com, deputies found Taylor in a bush, and following a confrontation, tasered him.

Taylor was reportedly hospitalised with self-inflicted knife wounds and has since been charged.

Park County Sheriff Tom McGraw told KDVR that his "biggest concern" was that the pursuit would lead to "a law enforcement vehicle crashing into an innocent citizen". 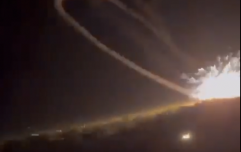 END_OF_DOCUMENT_TOKEN_TO_BE_REPLACED

The suspect was also being investigated for several other crimes that occurred in the area ahead of the patrol car theft in Park County, the Mail reported, adding that Taylor was also on probation for menacing, theft and DUI at the time of the incident.

popular
Groom shoots friend dead by mistake after firing shot in celebration at his wedding
The JOE Friday Pub Quiz: Week 300 - the Triple Century
'Dinosaur lady' wins internet with baffling Question Time remark on rail strikes
Seven awful films rated higher than Pogba’s “Pogmentary” on IMDB
Johnny Depp's lawyer Camille Vasquez annoys fans amid rumours she may defend David Dobrik
Russian missile does a U-turn during malfunction and smashes into troops who fired it
A definitive ranking of every swear word from worst to best
You may also like
News
Elon Musk’s daughter wins legal fight to lose his name and change gender
Fitness & Health
‘Flamingo test’ reveals your likelihood of dying within 7 years
Life
Moaning is not part of the female orgasm which is 'poorly understood', experts say
News
Uni student reveals he eats dog food for breakfast, lunch and dinner to save money
News
Hundreds of British Airways workers at Heathrow Airport to strike over summer holidays
Next Page