A Canadian lawmaker has offered his apologies after being caught out attending a digital parliament session from inside a toilet stall.

END_OF_DOCUMENT_TOKEN_TO_BE_REPLACED

As reported by local outlet CVT News and later by The Guardian, liberal party member Shafqat Ali attended a hybrid parliament session on Friday May 6 which was partly digital and partly in-person.

While his Zoom-esque feed was not visible to the public - only other parliament members - conservatives MPs reported noticing something funny and familiar about the background of his live video feed.

Suspicions eventually led to conservative MP Laila Goodridge suggesting to the Canadian House of Commons that Ali may be "participating in a wash room" somewhere in the parliament building. After taking a closer look at the stonework, a coat hook and door hinges seen in the background of Ali's digital window, this suggestion was later confirmed by a parliamentary page.

Speaking to his colleagues, conservative house leader, John Brassard explained to his fellow lawmakers that it looked as though Ali had placed his camera “on the ledge or ridge on the wall just above the back of the toilet.”

END_OF_DOCUMENT_TOKEN_TO_BE_REPLACED

He continued, explaining that: “The member of parliament was literally using the washroom while participating in a sitting of the House of Commons, the cathedral of Canadian democracy.

Shortly afterwards, Ali returned to video - albeit, this time from the comfort of what appears to be an office - to apologise for his rather uncouth choice of background.

"I want to take this opportunity to apologize sincerely and unreservedly to all members of Parliament for the unfortunate event that transpired last Friday," he began. 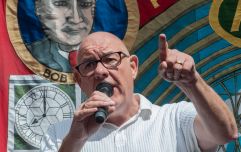 END_OF_DOCUMENT_TOKEN_TO_BE_REPLACED

“I take this matter extremely seriously, and I promise never to repeat this error again."

The apology was enough to convince deputy house speaker Chris D’Entremont to consider the matter closed - but not before issuing a warning encouraging MPs to be vigilant and wary of their surroundings whenever they are attending sessions digitally.

This isn't even the first time a member of the Canadian liberal party has been caught with their pants down either.

Back in 2021, when working from home was in full-swing, lawmaker Will Amos accidentally appeared on camera naked after returning from a run. He later apologised - but also admitted to peeing in a mug during another committee session.