On 24 April 1993 a bomb detonated by the Provisional Irish Republican Army ripped through Bishopsgate, a major thoroughfare in London's financial district.

The bombing killed one person, a photographer, and injured 44 people. The number of casualties for an area so usually busy was reduced due to a telegraph warning an hour before, and the fact that it took place on a Saturday.

One person in the vicinity at the time of the explosion was boxer and firefighter Nigel Travis, who was working in a pub in the area at the time.

Travers, who also does a bit of acting on the side - most notably as Erasmus in hit show Peaky Blinders - was training in London at the time of the attack, while working behind the bar in a pub in the area.

"I wasn't scared at all. It wasn't something I was worried about."@Nigel_Travis recalls working behind a bar in central London when the Bishopsgate bomb went off 😧 pic.twitter.com/K1p2bGXlV8 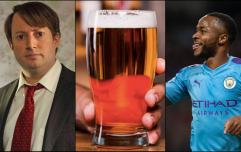 END_OF_DOCUMENT_TOKEN_TO_BE_REPLACED

Speaking to Chris Lloyd and Carl Frampton on TKO, Travis discussed the bombing and how it felt to experience.

"We went outside the pub and the City of London, the square mile, was just like a war zone. Glass, it was raining down, and maybe it's an exaggeration but it seemed like for over an hour it was still raining glass, because of how it expanded. It was mental," said Travis.

"(I was) aghast and shocked and had no idea. Obviously then it came out with the media, what had happened. But, I wasn't scared at all. It wasn't something I was worried about. Just retrospectively, afterwards, when I look back I think 'Wow, that was a bit close.'"


popular
QUIZ: How well do you remember Celtic players of the 2000s?
QUIZ: Name the players to have scored for six or more Premier League clubs
QUIZ: The hardest Gavin & Stacey quiz you'll ever take
How many times can you see the number 3 on this iPhone screen?
The JOE Friday Pub Quiz: Week 185
The JOE Friday Pub Quiz: Week 184
26 British biscuits ranked from worst to best