On the 14th of April, an Army sergeant operating out of Fort Jackson, identified as Johnathan Pentland, was arrested for threatening, verbally abusing and physically assaulting a Black man passing through his neighbourhood. 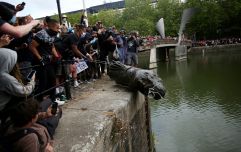 END_OF_DOCUMENT_TOKEN_TO_BE_REPLACED

Pentland accused the man, simply known as Deandre, of being an "aggressor" and a stranger to the area, despite simply walking down the street and living nearby. After ordering him to leave, Pentland pushed him and threatened to carry him away.

Now, after residents initially gathered outside the sergeant's home following the incident, the protests have grown and Black Lives Matter supporters have staged a more organised demonstration outside the house in Columbia, North Carolina.

You can see footage of the protests shared via various social media channels:

Too close to my house for me not to pull up (not even a 5 min drive). Jonathan Pentland was right.... We are a “tight knit community” and that’s exactly was we showed him. pic.twitter.com/YSvZmCXEtu

This is right now at the sidewalk outside #JonathanPentland's house where he assaulted a young Black man pic.twitter.com/Z1jeNhfguE

While the protests are rightfully angry, they have remained peaceful and there has been no intervention from the local police force so far. People have brought placards, megaphones and are even circulating food and water amongst those in attendance.

Pentland is yet to be convicted on either of his alleged assault and battery charges, but footage of him leaving his home has surfaced and the Black Lives Matter protestors don't look to be going anywhere soon.