As the war in Ukraine continues, it would appear that hacking group Anonymous has now taken down all Russian state TV channels, replacing broadcasts with Ukrainian footage and anti-war messages.

Photos and videos are being shared across social media of Russian televisions with their regular scheduled programming interrupted by messages said to have been sent by the hacktivist group.

This comes after Russian state TV has been heavily accused of censoring and/or heavily manipulating reports on what is really happening in Ukraine; just last week, they used the services of a famous child celebrity to create propaganda aimed at children. 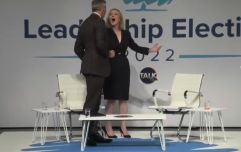 END_OF_DOCUMENT_TOKEN_TO_BE_REPLACED

Numerous messages have been displayed and people on Twitter have been taking the time to carry out the translations; one such message reads as follows:

"We are ordinary citizens of Russia. We oppose the war on the territory of Ukraine. Russia and Russians are against the war. This war is tied up in Putin's criminal, authoritarian regime.

END_OF_DOCUMENT_TOKEN_TO_BE_REPLACED

"On behalf of the ordinary citizens of the Russian Federation"

As you can see, Russians are also seeing what for many, may have been previously unseen footage - such as the missile strike in Kharkiv, which killed nine and injured 37.

Despite having already shown their solidarity with Ukraine in large-scale protests, many people are getting more information on what the situation is really like across the border.

The Russian government and national infrastructure has already been targeted, not only through official sanctions but also by the "hacktivist collective", hitting everything from the Russian space agency to spelling out anti-Putin messages in maritime data.

popular
Groom shocks wedding by playing video of his bride cheating with her brother-in-law
Man has hand 'chopped off' outside working men's club in attack like 'a horror film'
Astrologer predicts how World War 3 would start and end - it doesn't look good for anybody
SeaWorld responds after footage showing killer whales attacking each other leaves visitor in tears
Man in the running to be next PM admits he had to be taught how to use contactless card
FIFA consider moving start date of 2022 World Cup
Runner finishes last in 400m race as penis keeps falling out of shorts
You may also like
Politics
Brexit is turning Britain into an 'emerging market economy', sobering new analysis suggests
Politics
Johnson once described his time as foreign secretary as like being 'imprisoned in a steel condom'
Politics
Can you guess the real names of these UK politicians?
News
Why Nancy Pelosi's Taiwan visit is so important but could have dire 'consequences'
Politics
Jacob Rees-Mogg says he was 'wrong in the right way' about post-Brexit queues at Dover
Next Page