Afghan women are now living in fear for what the future holds.

With the Taliban having retaken Kabul, the capital of Afghanistan, widespread panic erupted across the city with Afghan residents trying to flee. Though an official Taliban spokesperson has said that the welfare of Kabul's citizens is of the utmost importance to them, fears over their rule have still run rampant. Numerous women have spoken to VICE about their worries surrounding the Taliban's takeover of the nation's capital.

“I can’t go out and I know I’m not safe here. The Taliban will kill me. They don’t like women like me," said athlete and women's advocate Nilofar Bayat.

“I had a comfortable and good life. I continued my work, duties, and sports as usual. I used to go out without any fear and followed my daily plans,” 22-year-old Zainab Hussaini told VICE World News. But now, she is uncertain if she will be able to complete her masters in politics or even continue to go to the gym.

“I am more afraid of rape and harshness for women, living under captivity and coercion, and that all our efforts in the last twenty years will be wasted,” she said. “Living under Taliban rule was a bitter experience in the past. Nothing is unlikely with the Taliban.”

All I can think of are the women of Afghanistan who are journalists, politicians, activists... I can't fathom the fear they must feel knowing they're likely going to be raped & killed by the Taliban for violating Sharia Law. I'm sick to my stomach. 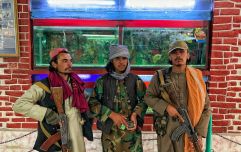 END_OF_DOCUMENT_TOKEN_TO_BE_REPLACED

“I’m worried about the women… who worked so hard and made progress, who have made achievements for the country and themselves.”

“We will respect rights of women – our policy is that women will have access to education and work, to wear the hijab," said Suhail Shaheen, a spokesperson for the Taliban.

Despite Shaheen's words, rising concerns for the wellbeing of the Afghan people are rising. "The new Taliban does not exist," one caller told LBC.

'The new Taliban does not exist.'

This caller who fled Afghanistan says women are being turned away from work and were 'asked to send their husbands instead.'@DavidLammy pic.twitter.com/uNzqradEay