The end might be nigh, as is societal collapse

A scientific paper from the '70s, the decade of disco for any millennials reading this, prophesied the collapse of society by 2050. But apocalypse theories are constantly cropping up, so why is this one so different? Well, unlike the Mayan calendar incident, this paper is actually on track with its theories so far.

Gaya Herrington, a sustainability analyst for the accountancy firm KPMG, researched the real-world applications of a theory for her Harvard thesis. She found that a decline in the standard of living would hit record lows come 2050.

South Asian countries are starting to see an increase in food security/Via Getty.

“[It] does not mean that humanity will cease to exist,” but rather that “economic and industrial growth will stop, and then decline, which will hurt food production and standards of living," she said.

She wanted to take a look at the "limits to growth theory" that was popular in the 1970s. It theorised that the collapse of civilisation was imminent if society continued to grow in both economy and population.

She concluded that “continuing business as usual, that is, pursuing continuous growth,” would ultimately lead to a decrease in the standard of living. This decrease will occur despite an increase in technological advancements.

Herrington posed solutions that would not be widely received. However, they aren't things we have never heard before. Reduced consumption and waste, investments in infrastructure, and limited population growth were among the solutions.

Surprisingly, the biggest population Growth is in Syria/Image Via Getty 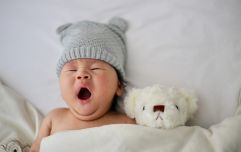 Most popular baby names of the year revealed

END_OF_DOCUMENT_TOKEN_TO_BE_REPLACED

The theory itself poses a concerning future. But this isn't a distant problem, as many of the dates are in the next decade. Per the paper, by 2030, the population will reach its peak and be followed by a steep decline.

Though this theory is just that, there is an undeniable underlayer that sparks interest in the hypothesis even today. There has been a 1.03% increase in the world's population since last year, and this has been the case since 1950. Current statistics certainly point towards that inevitable future.

popular
Emotional Robbie Savage introduces son Charlie's Man Utd debut while on commentary duty
ITV News' intro to Downing Street Christmas party clip is absolutely brutal
Elon Musk issues warning about crumbling of civilisation
A definitive ranking of every swear word from worst to best
Boris Johnson apologises for a party he says didn't happen
Met police to review leaked video of Downing Street aides joking about Christmas party
Majority of people think Boris Johnson should resign, according to new poll
You may also like
Life
World's population set to decline for first time in modern history
Sex
People in these professions are most likely to cheat on their partner
Food
UK's most-loved crisp flavours revealed and you all need to be stopped
Fitness & Health
Men with larger noses have bigger penises, a study shows
Life
Two thirds of Brits have trouble telling what day of the week it is
Next Page