The CEO of the electric vehicle company, Elon Musk, said in a tweet that Tesla has suspended car purchases using bitcoin, a form of cryptocurrency that relies upon an huge amount of computer power and in turn fossil fuels, over fears for the environment.

END_OF_DOCUMENT_TOKEN_TO_BE_REPLACED

On Twitter, Musk said in a statement: "Tesla has suspended vehicle purchases using Bitcoin. We are concerned about rapidly increasing use of fossil fuels for Bitcoin mining and transactions, especially coal, which has the worst emissions of any fuel."

The statement continued: "Cryptocurrency is a good idea on many levels and we believe it has a promising future, but this cannot come at a great cost to the environment.

"Tesla will not be selling any Bitcoin and we intend to use it for transactions as soon as mining transactions to more sustainable energy."

Musk added that Tesla is looking at other cryptocurrencies that use less than one per cent of Bitcoin's energy.

As reported by CNBC, around $365.85 billion was wiped off the whole crypto market, following Tesla's announcement. 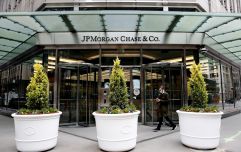 Elon Musk sued for £121m after series of controversial tweets

END_OF_DOCUMENT_TOKEN_TO_BE_REPLACED

Bitcoin is made by miners who utilise high-powered computers, frequently fulled by fossil fuels, to solve extremely complex mathematical equations.

The whole process relies upon a huge amount of electricity, which has sparked concerns given the amount of fossil fuels that are needed, particularly with regards to coal.

The Tesla CEO drew attention to the huge amount of energy Bitcoin was using on his Twitter thread.

popular
'Super recogniser' draws 'accurate' modern Maddie McCann to help police find her
Raphael Varane opens up on playing alongside Harry Maguire
Chilling video shows moment step mum tried to get away with murdering boy, 6
'I did three grams of coke during a game': Inside football's problem with Class A drugs
Mum in jail for murder pays tribute to son, 6, killed by his dad and new girlfriend
Maskless London commuters fined over £30k in just one day
The JOE Friday Pub Quiz: Week 272
You may also like
Tech
Tesla announces electric Cyberquad for kids
Tech
Elon Musk shares 'evidence' we are actually living in a simulation
Politics
UN gives Musk everything he asked for to donate $6B to end world hunger
Tech
Musk sells billions of dollars of Tesla stock after Twitter poll
News
Elon Musk wipes $40bn off Tesla value with single tweet
Next Page