She thought the likenesses were less than a-peeling

Rebekah Vardy has remarked that she thought Wayne Rooney looked like a "hot potato" in the court sketches produced as part of her legal battle against his wife Coleen.

END_OF_DOCUMENT_TOKEN_TO_BE_REPLACED

The case dubbed 'Wagatha Christie' concluded on July 29, with Vardy losing to former friend Coleen after the former attempted to sue for "leaking false stories" to the papers and social media back in 2019.

Speaking to The Sun in a recent interview following the verdict, the 40-year-old was reacting to some of the comments directed at her own depiction in the drawings, one of which remarked: "She looks like something out of Lord of the Rings."

The mum of two responded to the suggestion with a dig of her own, replying: "I’d rather look like something out of Lord of the Rings than a hot potato." 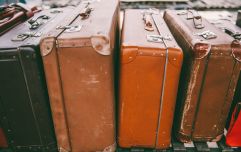 END_OF_DOCUMENT_TOKEN_TO_BE_REPLACED

While Vardy appeared in emotional in the interview, breaking down in tears and stating the she feels she has been "let down by a lot of people" including the "legal system", she had no issue with firing back at Coleen's husband Wayne who was entirely uninvolved in the tabloid saga.

Revealing that she asked Coleen "what the f*** is this?" following her now infamous social media post. Vardy still insists she is innocent, insisting: "I will say it till I'm blue in the face, I didn't do it."

Nevertheless, despite trying to sue Rooney for damages inflicted upon her, Vardy now reportedly faces legal bills of up to £3 million for her time spent in court, with the judge having ruled her evidence as "manifestly inconsistent... evasive or implausible"

popular
Incredible case of the only known individual whose parents were two different species
Multiple fatalities after planes collide mid-air over airport
Andrew Tate banned from Instagram and Facebook
Court hears cringeworthy poems Ryan Giggs wrote to his ex
Former Playboy Bunnies detail what it was like having unprotected orgies with Hugh Hefner
Footage emerges of Andrew Tate getting knocked out during kickboxing bout
Rishi Sunak names his usual Maccies order - but it was withdrawn more than 2 years ago
You may also like
Crime
UK city named the 'most dangerous' in Europe, according to study
Crime
Mum cuts off boyfriend's 'private parts' after he 'tried to rape 14-year-old daughter'
News
Human remains found in suitcases are the bodies of two children
Crime
Woman arrested for murder after inmate dies following visitation kiss
News
Knifeman spotted fleeing scene after OAP busker is killed
Next Page