British strongman Eddie Hall is a monster of a man.

The World's Strongest Man competitor weighs in at 28 stone and holds the all-time deadlift record at an eye-watering 465kg.

END_OF_DOCUMENT_TOKEN_TO_BE_REPLACED

He fuels his ferocious strength workouts by eating 10,000 calories throughout the day.

If the thought of ploughing through all that food every day is making you queasy - it should, because it would take a normal human bloke four days to polish it off.

You'd have to be bonkers to even contemplate it, right?

But Adam Moran, the brains and belly behind BeardMeatsFood, for some reason was wondering whether he could do it in one. No, not one day - just one gargantuan, gut-busting meal.

We remember the poor bloke who had a crack at eating The Rock's diet one day - it didn't end well. And those puny portions were barely half of what the four-time Britain's Strongest Man winner puts away.

But Adam, despite being a personal trainer, is also a competitive eater...and he's pretty damn good at it. 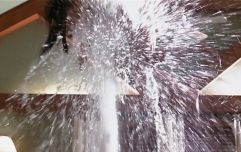 END_OF_DOCUMENT_TOKEN_TO_BE_REPLACED

The total weight of the food Eddie Hall consumes every day came to 7.5kg. That's more than a stone.

This was what was on the menu... 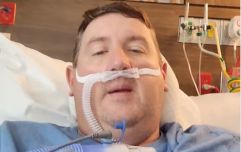 END_OF_DOCUMENT_TOKEN_TO_BE_REPLACED

There's more? One litre of coconut water and two scoops of protein

It sounds like an impossible amount for anyone to eat in a single day - nevermind in under an hour - especially when you see it all laid out on the table.

But Adam attacks it valiantly and it probably took him less time to see it all off than it did to prepare the bloody thing.

popular
Addison Rae banned from TikTok
Madeleine McCann prosecutors ‘100% convinced’ they’ve solved case
UFC star "kicked out" for celebrating Liverpool goals in Watford end
Fans praise Chris Evans for being honest about his mental health
Megan Fox reveals graphic sex confession about Machine Gun Kelly
A definitive ranking of every swear word from worst to best
Sir Michael Caine says work offers have 'dried up'
You may also like
News
Bill Clinton hospitalised in California with infection
Food
The UK has revealed its favourite meal deal, and the results might surprise you
Coronavirus
Study reveals why some people get 'Covid toe'
Life
Two-thirds of under 30s report suffering from 'Covid back'
News
People are convinced the 'worst cold ever' is currently going around
Next Page