Gordon Ramsay looks to be in the shape of his life

Gordon Ramsay certainly doesn't look like he's about to turn 51.

Given his ability in the kitchen, we wouldn't have blamed Ramsay for stuffing his face all the live long day but that definitely doesn't seem to be the case as Ramsay's shown off his impressive physique in a recent Instagram post.

A well-known fitness fanatic, Ramsay has taken part in multiple marathons and has even dedicated himself to Ironman competitions in the past.

One of the most incredible feelings ever sat in the water on the start line minutes before the cannon goes off @im.kona good luck to all the athletes taking part and a big thank you to all the supporters and helpers @iamspecialized_tri @ironmantri ,let the island come to you. Best wishes and race safe. Next year I'm coming back can't wait


When he's not preparing Michelin-quality meals or roaring profanities at restaurateurs on reality television, Ramsay actually trains like something of  a professional athlete. 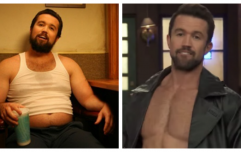 Mac from Always Sunny explains how he got so ripped

END_OF_DOCUMENT_TOKEN_TO_BE_REPLACED

"My father passed at 53 with a heart attack. My brother's an addict," Ramsay told Delish last year. "So I've got that scare-mongering going on, on a weekly basis, that I need to stay fit."

Ramsay is a fiend when it comes to training and on Sundays - his most intense day - he is known to work out for close to eight hours in total after waking up at 4am. A 5am bike ride will see him travel 180 kilometres but he won't rest after that as he'll force himself to run 10-15 kilometres once he gets off the saddle.

Training has well and truly started for @thelondontri - can't wait for race day! There are just a few #TeamRamsay spots left so hurry up and sign up to swim, bike and run in aid of @greatormondst - link in my bio ! Gx

And when it comes to cutting out food, Ramsay is one of the fortunate ones who doesn't feel the need to diet.

"I don't think dieting is healthy. Chefs shouldn't diet. I'm lucky; I can burn [calories]," he said. "I just stay on it."


popular
QUIZ: Identify which European clubs these 20 badges belong to
THE JOE FRIDAY PUB QUIZ: WEEK 174
Liverpool winning the league or: how I learned to stop worrying and love the bomb
How will Liverpool's new Nike shirts look next season?
Tickets for UFC London are about to go on sale
QUIZ: Can you guess the pixelated movie posters?
Liverpool are planning two victory parades for Premier League and Champions League

You may also like
Entertainment
QUIZ: How well do you know The Office UK Christmas special?
Entertainment
Predicting the winner of I'm A Celeb 2019 based solely on the promo photos
Quiz
QUIZ: How closely were you paying attention to GBBO 2019?
Entertainment
9 cringe moments from The Apprentice this week
Entertainment
Personality Test: Which Succession character are you?
Next Page