Dicks are funny. No one's sure why - but we all know they just are. 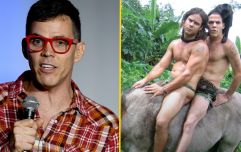 END_OF_DOCUMENT_TOKEN_TO_BE_REPLACED

But Jackass Forever does more than just documenting naked guys standing with their dicks out though - it goes balls deep in dick stunts.

It's side-splittingly funny stuff, and you'll even learn a thing or two about the appendage along the way.

Here are the best dick and ball sack stunts in the new Jackass film. 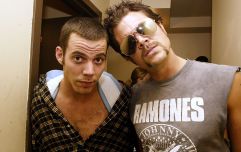 END_OF_DOCUMENT_TOKEN_TO_BE_REPLACED

Steve-O, otherwise known as the second-most famous man in Jackass other than Johnny Knoxville, performs a dick stunt in the new film which looks really really stressful.

He appears butt naked then invites a bee-keeper to park a bee on his bell-end. The idea is that the bees hanging out nearby in the hive might wanna go and hang out too, as they typically follow the Queen, which is parked on his appendage.

Knoxville and the other ageing pranksters stand by in protective suits as the keeper directs the hairy stingers in the right direction. What follows is ludicrous, obviously, dangerous, obviously, but also kinda impressive.

Bees, it turns out, don't need a hive to hang around in and are open to bedding down on ball sacks too.

Johnny Knoxville loses a fight with a bull in Jackass Forever (Photo: Paramount)

There's a quiz show where your balls are punished by a flipflop on a mechanised pulley system if you don't know the right answer.

Sometimes it isn't entirely clear which stunts have been set up on Jackass. Sometimes it feels like reactions are slightly performed rather than 100% reactive and in-the-moment.

But for this one, there's no hiding the crew's pained expressions. Three of the Jackass team are lined up and get hit in the balls by rogue flip-flops. Slow-motion shots leave none of the pain off the table.

Guys bend and crease, and sometimes fall to the floor with their mouths wide open, screaming in agony.

It's horrendous - and I couldn't stop ogling for more.

A ball sack terrorises a city

Johnny Knoxville at the premiere for Jackass Forever in Los Angeles (Photo: Getty)

It took me 30 seconds or so to realise it was a dick and not a huge, towering prop.

And you say dicks are just there for laughs? Well no! They're there for *actual storytelling* too, and to create actual suspense. No artistically crafted pretend dick monster ever could look as menacing as a real one.

Then there's the pogo stick trick

Punched in the nuts? Boring! Why not get someone to pogo stick a guy in the balls instead?

That was the thinking behind the film's most unbelievably savage dick scene, which makes up one of two occasions in Jackass Forever that was so shocking that it was time to look away, cover the eyes, and guess when the scene was over.

There's so much more dick content. As cast member Jeff Tremaine told The Guardian: "Listen, it’s never not funny to see someone else get hit in the nuts.” We couldn't agree more.

Ten years after the last instalment of Jackass, the team is back, and with Knoxville now 50, it's nostalgic and comforting to see them still this relentlessly good at physical comedy.

It's just scene after scene of hilarious stunts, just how you like it.

Jackass Forever is in cinemas from Friday February 4