Johnny Depp has revealed that he is willing to do whatever it takes to play Jack Sparrow forever, even if it means playing him at kids' birthday parties.

While picking up a lifetime achievement award at the San Sebastián Film Festival in northern Spain, the actor admitted to wanting to play Captain Jack Sparrow forever, reports Movie Web.

“are you okay?” no. johnny depp just told everyone that nobody can take jack sparrow or the joy he brings others away from him pic.twitter.com/l6fUxYn5iJ

"I suppose this is the positive side of having, in a strange way, given life to those characters like Captain Jack or whatever character - that I was lucky enough to locate and bring to life the beauty of Captain Jack Sparrow," Depp said.

He continued: "I'll go to somebody's house - man, I'll perform at your kid's birthday party at this point."

The swashbuckling adventures of Captain Jack first appeared in 2003's Pirates of the Caribbean: The Curse of the Black Pearl. Alongside the likes of Geoffrey Rush, Orlando Bloom, and Keira Knightley, Depp sailed the seven seas enacting havoc across English colonies.

Sparrow quickly became a cult figure, amassing fans and parody Halloween costumes that could never quite match up to the bravado and outright campness of Depp's original.

END_OF_DOCUMENT_TOKEN_TO_BE_REPLACED

The franchise birthed five films, each with its own unique plot line that met at the intersection of history and fantasy. It became the 14th most successful franchise of all time, behind the likes of Marvel, Star Wars, Harry Potter, James Bond and Jurassic Park.

Depp continued by saying that no studio can take Sparrow away from him.

"I can just do that myself and nobody can take that away. That's the greatest pleasure of Jack Sparrow. 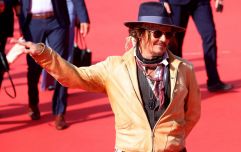