What: Death Becomes Him

"Live your life, take some risks, and have fun. And don't wear crocs..."

At the beginning of Rich Wilson’s show, you are told that you're dead. From the heat in the room, you’d be forgiven for thinking you'd ended up in the Bad Place, but Wilson explains it is simply purgatory. There are two metaphorical doors, with heaven and hell reserved for 'legends' and 'dicks' respectively. As for himself, Wilson explains that he has been a bit of both in his time. Over the course of the subsequent hour, it's a question of where he'll end up.

There is something rather poignant about the whole set up. Not because the entire audience is coming to terms with their own mortality, but because it feels a little bit like a retrospective of a life fully lived. Wilson is relatively young and full of pomp and vigour on stage - so much so that he does away with the mic and seems to grow as a result - and yet here he is, laying out the snapshots of a colourful and varied past as if he has little more to do than bid adieu. 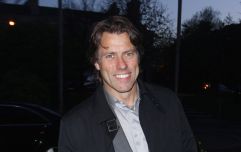 END_OF_DOCUMENT_TOKEN_TO_BE_REPLACED

Not that it's a morbid affair. Wilson oozes devilish charisma and is rarely without a smile as he spins his entertaining yarns in mortal limbo. As well as being a masterful raconteur, he is a genuinely warm and generous host. There is no catty sniping in his crowd work, and the only target for mockery is himself. He makes reference to his suspicion of organised religion and those who practice it with unnerving zeal, but it is clear that he has true faith in his fellow man and woman.

Not that it's all sweetness and light. Wilson is the first to admit that he has made some questionable choices. Sometimes he has overstepped the mark and veered more towards dick than legend, but his intentions remain noble. He may get himself into scrapes and confrontations, but it's to defend his childhood mate for racism, or counter a fat-shaming insult towards an ex-partner. And then there's that time he turned tricks in a gay sauna. You live and learn.

As much as the premise of the show is centred around heaven and hell, there is no sermonising or moral arbitration. Rather you are advised to take drugs, touch each other (consensually) and live life to the very fullest. Wilson's contemplation of death is less a funeral and more a glorious wake, full of laughter, fun times and good vibes. And if you can run after a bully without spilling your chips, you've stolen his heart. If this joyous hour is purgatory, heaven can wait.

You can buy tickets for Death Becomes Him here.