You know how it goes at this time of year.

Dare we say it, Christmas is on the horizon, meaning most of us will have little choice but to part with lots of our hard earned cash in the weeks and months to come. The office parties, the pub catch ups with old friends and the buying of presents for loved ones and other members of the family we don't actually see or like that much. 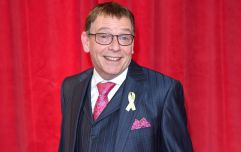 END_OF_DOCUMENT_TOKEN_TO_BE_REPLACED

It's at times like this we should all probably be keeping a careful watch on the pennies.

Spare a thought then, for the good people of the fictional London borough of Walford, who almost need to take out a mortgage just to get themselves a coffee and a bacon sarnie in the morning...

Yep, much to the horror of viewers of Eastenders viewers, we learned on Friday that the the robbing bastards at Kathy's are charging a whole six quid for a bacon or sausage butty and a coffee. Six. Quid.

A sign was spotted on the wall behind Mick as the pub landlord had a chat with Shirley.

@MrDDyer is not happy bout the price in the cafe for a sarnie n a brew. 😂 eastenders cafe is daylight robbery 😂 pic.twitter.com/ZmYBo0pJkm

£6!Bacon or sausage sandwich and a coffee at Kathys! Having a laugh ain't they ?#Eastenders

anyone realised that the cafe is so expensive like £6 for a bacon butty and a coffee, that’s daylight robbery #eastenders 😳😳😳

popular
Moment thug kidnaps teenage ex in horrifying ordeal that left her unable to walk or talk
Coronation Street star left homeless after sharing anti-vax views
Cristiano Ronaldo complained to Transfermarkt about valuation before blocking them
Boris Johnson outdoes himself with the most ridiculous denial he's ever made
Why dogs are getting sick and symptoms owners should look out for
Martin Lewis issues urgent advice for households ahead of energy price hike
Dr. Dre shares unbelievable video of Eminem's skills to prove no rapper could beat him
You may also like
Entertainment
Danny Dyer gives emotional speech after winning Best Serial Drama Performance at the National Television Awards
Entertainment
Carry On actress June Whitfield has died, aged 93
Film
Trailer for the Hellboy reboot is here; features Big Mo from Eastenders with a machine gun
Entertainment
EastEnders actor Leslie Grantham dies aged 71
Entertainment
EastEnders fans furious with Mick after 'ridiculous' moment on last night's episode
Next Page