We have plenty of faults don’t we. And we exacerbate those faults by stubbornly refusing to talk about them. To anyone. Ever. But all that’s about to change with the launch of a new audio offering from JOE that launches on Thursday June 27.

Boys Don’t Cry, presented by one of Britain’s biggest stand-up comedians Russell Kane, is the personification of JOE in a podcast - a mix of humour and serious conversation - around some of the issues that men spend a life time not talking about: from sobbing in private to mental health, body hair to Brexit.

Boys is a thoughtful, surprising, laugh out loud funny show that makes you think about some of the challenges of being a man in 2018. The weekly 40-minute show, recorded at JOE’s studios in central London, aims to entertain and provoke conversation amongst men in Britain by focusing on topics that widely remain taboo and in uncharted territory.

Boys Don’t Cry is JOE’s second podcast and follows in the footsteps of the hugely successful ‘Unfiltered with James O’Brien’, which is a regular in the top 10 UK charts, and is approaching a remarkable 2.5 million downloads since its launch in October 2017.


The idea for the show was born in a coffee shop in Manchester’s Northern Quarter and subsequently moulded in a series of late night text messages between Kane and JOE’s Head of Audio, Simon Clancy. “We asked each other what we really talk about when we talk about men,” said Clancy. “And discovered that there were so many areas that we were too scared or too proud to go into, because digging around in the inner recesses of male insecurities just isn’t what we do. Until now. There’s a subtlety to this show, a real bathos and pathos that will appeal to everyone.” 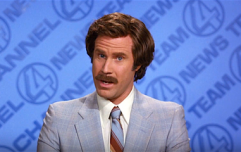 Will Ferrell is bringing back Ron Burgundy for a new podcast

END_OF_DOCUMENT_TOKEN_TO_BE_REPLACED

Adds Kane, “I’ve always wanted to turn a microphone on those quiet chats that us more emotional blokes have. My instinct was that the talk would be interesting and entertaining in equal measure. And now it’s happening. And I’m buzzing like a bee on a Berocca.”

Kane will host a panel of three guests each week - men and women - which will include a variety of names across British culture, from fellow comedians and commentators to TV stars and politicians.

Boys Don’t Cry will be available to download every Thursday from Apple Podcasts and all mainstream podcast providers. Each episode will also be filmed and hosted in full on JOE’s YouTube channel, with shorter highlight clips shared across Facebook, Twitter and Instagram.