Shocking footage has emerged appearing to show a Jeremy Corbyn thug using her face to attack an audience member’s fist at a Jacob Rees-Mogg speech over the weekend. 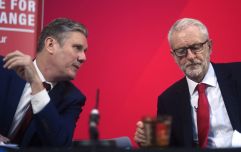 END_OF_DOCUMENT_TOKEN_TO_BE_REPLACED

Video posted online captured the scenes at the University of the West England in Bristol. Footage shows the MP for North East Somerset stepping in to separate rivals as onlookers call for them stop.

Mr Rees-Mogg, a leading Brexiteer voice who has been tipped as his party's next leader, had been speaking at the University's Politics and International Relations Society. The website Guido Fawkes reported a witness as saying that masked protesters stormed the event and began shouting at Mr Rees-Mogg, “calling him a bigot and a racist”-  just for being a bigot and a racist.

BBC Somerset reporter James Craig, who was at the event, stated that the protestors were shouting "anti-Conservative rhetoric" and "trying to shout him down".

In another vile example of the hard left exercising their right to free speech, it was claimed that they were shouting anti-Conservative rhetoric.

The BBC’s James Craig added, “rather than halting the event, or ignoring them, Mr Rees-Mogg approached them and walked up to the back of the theatre where they were and tried to talk them down.”

It is then that, as the shocking footage shows, one of the hard left thugs, who were probably personally sent by Jeremy Corbyn, somehow drew a gammon-complexioned audience member towards her and appeared to attack his FIST using her FACE. So much for the “kinder, gentler politics” of the – it says here – “tolerant left”.

The episode will no doubt be embarrassing for the Labour leader – a lifelong pacifist – who had nothing to do with either the protestors or the event.

In response to the events, Conservative Party Chairmen has called for new safe space laws for snowflakes.

The @Conservatives are going to change the law to make it against the law for people to intimidate others. @BrandonLewis highlighting that we need to put an end to bullying in politics. When will Labour step up? #sundaypolitics pic.twitter.com/inyPpnpJ2P

popular
Robinho to begin prison sentence after rape conviction appeal is rejected
Man kept as slave in shed for 40 years on Wales caravan park
Barcelona willing to pay £45m for Brazilian 15-year-old
A definitive ranking of every swear word from worst to best
Marvel actor Gaspard Ulliel passes away aged 37 in ski accident
British Airways cancels flights to US after 5G concerns
'My cat is so huge everyone thinks he's a dog - and he's still growing'
You may also like
News
David Lammy apologises for nominating Jeremy Corbyn to be Labour leader
News
Breaking: Tory councillor to pay 'substantial damages' to Jeremy Corbyn over Liverpool bomb tweet
Politics
Director Ken Loach says he has been expelled from the Labour party
News
Jeremy Corbyn could be reinstated as Labour MP as supporters draw up "urgent" plans
Politics
Ex-Labour MP says party must return to Corbyn's 'magnificent' manifesto
Next Page