Imagine if you could listen to In The Air Tonight again for the first time, with no idea what was going to happen at 3 minutes 40 seconds

Two YouTubers have gone viral for their excitable reaction to hearing Phil Collins' classic track In The Air Tonight for the first time.

Williams, 21-year-old twins who run the TwinsthenewTrend channel, posted a reaction video of the pair listening to the iconic song for the first time in late July.

A clip taken from the full video has recently gone viral on Twitter, with people delighted to see a new generation of music lovers being introduced to one of the great pop songs of the '80s. 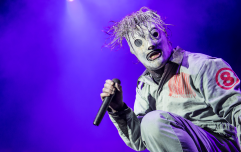 END_OF_DOCUMENT_TOKEN_TO_BE_REPLACED

In the full video, the twins are enjoying the song from the off, perhaps oddly comparing it to a WWE entrance theme song, but nevertheless clearly connecting with the classic tune.

But then the famous drum pattern kicks in, sending Tim and Fred into a new dimension. Fred commented: "I've never seen somebody drop a beat three minutes in a song!"

Tim agreed, calling the song "a straight banger", and it's impossible to disagree with him.

You can watch Tim and Fred's full reaction video below.


popular
Planks are one of the worst ab exercises, says Triple H's personal trainer
FootballJOE's Badge Quiz - #2
Arsenal handed boost in chase for Lyon midfielder Houssem Aoaur
The definitive ranking of Gary Lineker's best and worst dad jokes
The Two Escobars, one of the best football docs ever made, is on BBC iPlayer
QUIZ: Name the obscure characters from The Simpsons (Part Three)
BBC to take away stars' Twitter accounts if they breach impartiality guidelines

You may also like
Entertainment
Watching Inbetweeners with your parents
Entertainment
Magic tricks you can learn to do in just five minutes
Food
French person tries English food for the first time
Comedy
The pre-recorded comedy night police tried to shut down
Sport
Football Manager: Veteran player hands his team to a rookie
Next Page