The producers of the Spitting Image remake have defended the decision to include climate change activist Greta Thunberg amongst the public figures being mocked on the new show.

The show has already revealed puppets of politicians such as Boris Johnson, Donald Trump and Priti Patel, as well as celebrities like Dwayne Johnson and Kanye West.

But while Greta Thunberg most definitely is an internationally known, newsworthy figure, she is still just a 17-year-old girl, who also happens to have autism.

Group director of streaming video on demand at ITV, Reemah Sakaan, defended the inclusion of a Thunberg puppet on the show, saying that she would appear in a sketch about climate change.

“It’s a very straightforward joke and is nothing to do with her as an individual,” she told the Broadcasting Press Guild.

Will Harrison, the boss of BritBox (where the new Spitting Image will streaming), also said that the real Thunberg had liked a picture of her puppet on Twitter.

Reemah Sakaan went on to say that because the new show was on a streaming platform, it could go harder with its satire. 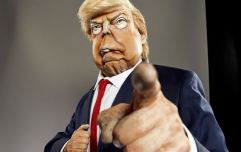 END_OF_DOCUMENT_TOKEN_TO_BE_REPLACED

“If the show isn't stirring controversy it’s probably not doing what it set out to do, or being true to its origins.”

Spitting Image creator Roger Law, who has been involved with both the original and the new show, said on The Andrew Marr Show that the rebooted series would be skewering both the left and the right.

He said it was "no fun" to stick to just one side. “There’s lots of ammunition to throw at the other side as well. You go for them all.”

The original Spitting Image series ran from 1984 to 1996 on ITV. The new version starts on streaming service BritBox on October 3rd, with over 100 new puppets.