You’re not the boss of me now…

Bryan Cranston has announced that a Malcolm in the Middle reunion is happening.

In an Instagram post, he said the original cast of the 2000s sitcom will reunite on Zoom to read the script from the pilot episode, this Saturday evening.

It is to mark the show’s twentieth anniversary (yes, you are old, deal with it). It is being organised by Linwood Boomer, the creator of Malcolm in the Middle, to raise money for his charity Healing California, which provides free dental, medical, and vision care to those in need in the state.

Fans can take part in a fundraising auction to help the charity, with the chance to virtually attend the reunion and speak with the cast, with autographed memorabilia from the show also up for grabs. 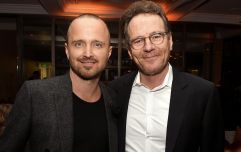 END_OF_DOCUMENT_TOKEN_TO_BE_REPLACED

Of course, these days, Bryan Cranston is best known as Walter White from Breaking Bad. But before he started playing Heisenberg, he was most recognisable as Hal, the father of four (later five) boys in the Fox family sitcom.

Malcolm in the Middle ran for 151 episodes across seven-season between 2000 and 2006. Agent Cody Banks himself, Frankie Muniz, starred as the title character Malcolm, the middle kid of the family who has an IQ of 165 and has trouble fitting in. Surrounding him were his older brothers Reese (Justin Berfield), Francis (Christopher Masterson), the latter of whom is off at military school, and his younger brother Dewey (Erik Per Sullivan).

Rounding out the cast was Jane Kaczmarek as the boys’ long-suffering mother Lois. Hal and Lois’ fifth son Jamie was then added at the end of season four.

It was announced that Malcolm in the Middle was going to be on Disney+, but when the service launched it was nowhere to be found. Still, anyone who grew up in the early 2000s will have fond memories of watching it in double bills with The Simpsons on BBC 2.

popular
Can you identify these cheeses just from a picture?
The JOE Friday Pub Quiz: Week 227
UFC fighter axed from Conor McGregor card after bizarre security breach
QUIZ: Match The Simpsons quote to the character who said it
Eminem stuns Dana White by telling him his opinion "doesn't matter"
QUIZ: Name these pixelated 'Game of Thrones' characters
QUIZ: Name all 50 of these Football Italia era players
You may also like
Entertainment
Test your film knowledge with our JOE movie quiz
Entertainment
Jesse Pinkman is back in the trailer for El Camino: A Breaking Bad Movie
Entertainment
Bryan Cranston and Aaron Paul release mysterious possible tease for the Breaking Bad movie
Film
One of Bryan Cranston's best perfomances is now on Netflix
Film
Breaking Bad movie featuring both Bryan Cranston and Aaron Paul 'confirmed'
Next Page