Lucasfilm has said they will no longer work with The Mandalorian star Gina Carano due to her social media posts.

"Gina Carano is not currently employed by Lucasfilm and there are no plans for her to be in the future," a Lucasfilm spokesperson confirmed to The Verge.

"Her social media posts denigrating people based on their cultural and religious identities are abhorrent and unacceptable."

she has been openly anti-mask, and a few months ago would be parroting conspiracies about how the coronavirus would be over after the election bc "fake news." She's also associated with neo-nazis who supported trump and the insurrection pic.twitter.com/NEv29gZ7FU

As reported by The Hollywood Reporter, she shared a post on Instagram appearing to compare the treatment of Jewish during the Holocaust to Republicans in the present day.

THR also reports that she has been dropped by her agents UTA.

We need to clean up the election process so we are not left feeling the way we do today.
Put laws in place that protect us against voter fraud.
Investigate every state.
Film the counting.
Flush out the fake votes.
Require ID.
Make Voter Fraud end in 2020.
Fix the system. ??

Gina Carano played Cara Dune in The Mandalorian, a former Rebel shock trooper turned mercenary who befriends Din Djarin and helps him look after The Child. 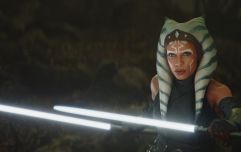 END_OF_DOCUMENT_TOKEN_TO_BE_REPLACED

Carano originally found fame as an MMA fighter, competing in Strikeforce, and is considered a pioneer of women's MMA. She moved into acting after she caught the attention of director Steven Soderbergh, who cast her in the lead of the 2011 action movie Haywire, alongside Michael Fassbender, Ewan McGregor, and Channing Tatum. She then went on to have supporting roles in blockbusters like Deadpool and Fast & Furious 6.

popular
McDonald's launching new Big Mac with twist for first time ever in UK
Evan Rachel Wood claims Marilyn Manson ‘essentially raped her’ in music video
Everything we know about new 'stealth Omicron' strain
Pierce Brosnan has the perfect response to trolls who attack wife's weight
Chelsea forced to change Stamford Bridge changing room after Liverpool complaint
Katie Price could be jailed for five years after arrest on Friday
Hero Jordan Henderson tries to prevent Liverpool fan from taking shirt off child
You may also like
Film
Rian Johnson's Star Wars trilogy is still happening
Football
David Moyes compared to Emperor Palpatine from Star Wars in this post-match interview
Film
Daisy Ridley says she "wept all day" after The Rise of Skywalker wrapped filming
Television
The Book of Boba Fett is an original series coming in 2021, Disney has confirmed
Entertainment
WATCH: The trailer for the final season of Peaky Blinders is here
Next Page