Fury was up against a sluggish and cumbersome opponent

Making his debut on American soil, Tommy Fury picked up the win over Anthony 'Pretty Boy' Taylor - but pundits were far from impressed. 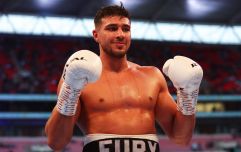 END_OF_DOCUMENT_TOKEN_TO_BE_REPLACED

Despite dominating all four rounds by some distance, Fury failed to knock Taylor out, and the Californian's unconventional (often sluggish and cumbersome) style made the contest a tough watch.

Many have speculated that Fury went deliberately easy on Taylor so as to secure a fight with Jake Paul. For all Jake Paul's success in his first four fights, he has yet to face anyone with the boxing pedigree of a fighter such as Tommy Fury.

If Fury had breezed through Taylor in the first round and knocked him clean out in seconds, it is likely the YouTube sensation might think twice about rushing into the ring with him.

Nevertheless, Fury's fight with Taylor didn't go down too well on social media.

UFC legend and current pundit Daniel Cormier weighed in, giving his "honest opinion" of Tommy Fury as "not very good".

Honest opinion of Tommy Fury. Wasn’t very good! Looks the part, but can tell he is still very raw. This performance makes his chances to fight Paul better. He isn’t very scary, maybe he will be but not as of now. 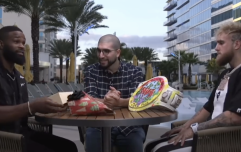 END_OF_DOCUMENT_TOKEN_TO_BE_REPLACED

Others said he "had a lot to learn". Fury's father, John Fury, even hinted at a similar stance on BT Sport Box Office when he said the fight "was what it was".

It seems that Tommy Fury himself would agree, as he told reporters he thought his performance was "dogs**t".

After his win over Taylor, Tommy Fury promptly called Jake Paul out when interviewed by reporters.

Speaking to BT Sport's Caroline Pearce, Fury said: "No excuses, no running, no hiding. I want you next you bum!"

Later on in the night, after Paul had defeated Tyron Woodley, the two appeared to clash backstage at the Rocket Mortgage FieldHouse.

It remains to be seen whether Jake Paul will accept Tommy Fury's challenge, however, as he verbally agreed to a rematch with Woodley in the aftermath of their fight.

Frustrated with the loss, Woodley said: "I feel like I won the fight. F*** the Tommy Fury fight, me and Jake need to run that back. I want a rematch."

Jake Paul responded by telling Woodley that if he goes ahead with getting an 'I love Jake Paul' tattoo (as promised pre-match), he will agree to a rematch. Woodley promptly agreed and the pair shook hands.