We’ve all seen sports fans go to extreme lengths to watch their team.

Earlier this season we had a group of Manchester City fans travel to watch a behind-closed-doors Champions League game against CSKA Moscow from the window of a nearby flat. 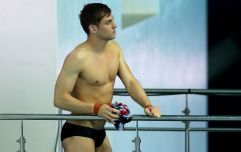 END_OF_DOCUMENT_TOKEN_TO_BE_REPLACED

There must be something in the freezing Russian air, as more than a dozen Spartak Moscow fans – not content with watching from the stands – took to the roof of the Arsenal Tula stadium for a recent league match.

A group of Spartak fans climbed on the roof of Arsenal Tula's stadium. One fell down and was severely injured. pic.twitter.com/FZ0J8fjKf1

It doesn’t end there…one fan went as far as literally hanging from the rafters before falling. But don’t worry, he escaped with nothing more than a broken arm.

If you’ve got a fear of heights, the video below probably isn’t for you.

We doubt the Spartak players were too impressed, least of all Kim Kallstrom.

Having spent part of last season in England with Arsenal, one significant injury per week seems pedestrian in comparison.