Having missed a penalty in Manchester United's shoot-out defeat at the hands of Middlesbrough, the criticism of Wayne Rooney's poor form continues.

But Paul Scholes doesn't seem to think that the club captain is entirely to blame, stating that Rooney's problems are a result of the way the current United team are playing. 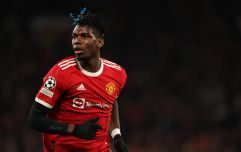 Manchester United back Paul Pogba after calling out The Sun

END_OF_DOCUMENT_TOKEN_TO_BE_REPLACED

In an interview with BBC Radio Manchester's Mike Sweeney, Scholes discussed how he'd studied Rooney throughout the recent Manchester derby.

"I was at the Manchester derby on Saturday and I thought I'd just watch Wayne Rooney for 20 minutes," Scholes explained. "His movement was brilliant... But when he's playing in that team no one's prepared to pass him the ball.  You'd be tearing your hair out as a centre-forward."

Adding to this, Scholes claimed that any striker would struggle with the current team.

"I played with some brilliant centre-forwards and I don’t think they could play in this team," he continued.

END_OF_DOCUMENT_TOKEN_TO_BE_REPLACED

"He's had a lot of criticism. We know Wayne can do better - Wayne will know himself that he should be doing better when he's on the ball, but I think it's a very difficult team to be a centre-forward in."

Scholes, who wasn't known for being particularly vocal in his playing days, seems to have no problem when sharing his opinions on his former club.

His comments won't be received too kindly by Louis van Gaal, especially after he used the same interview to claim that he wouldn't enjoy playing in the current United side.