"That's a very good question, and a very difficult one to answer... "

'Who were the best and worst players to referee?' Nigel Owens gave this one some thought before he dived on in. 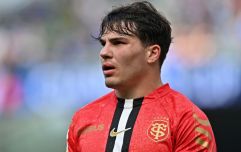 END_OF_DOCUMENT_TOKEN_TO_BE_REPLACED

The Welsh referee has stepped down from officiating at Test level in 2020 and last oversaw a professional club game in March of this year. The last time he was out on a pitch as a ref was for a centenary match between Trimsaran and Llanelli.

Owens has his hands full on his farm, but still finds time to do some punditry work and video features with the likes of the BBC, Amazon Prime and World Rugby.

Our very own Alex Roberts caught up with Owens and found him in great form as he discussed nightmare players, life after refereeing and law changes he would love to see in the game.

"Rugby is a game for all sizes," Owens reflects. "You have your biggest up front, all the way down to your 9s, who are usually the smallest, and most talkative!"

"They've all been pretty good to referee, to be honest," he says.

"You tend to find that when you were reffing Ronan O'Gara and Peter Stringer together, well, you had your work cut out!

"And then Johnny Sexton's not much better, and Dan Biggar here in Wales.

"Joe Marler, then, is always trying to be funny on the field, in a nice way. You're trying to tell yourself to be serious and he'd wink at you."

"I don't think there's anybody that would be the worst," Owens adds, "but the scrum-halves are usually the most difficult to deal with. Them and the out-halves are the most chirpiest."

Nigel Owens praises France star Antoine Dupont for breaking the 'chirpy scrum-half' mould while singling out former Wales and Lions captain Sam Warburton as the most respectful captain to deal with.

In terms of best players he ever had the chance to be on the pitch with, and see in full flow, Owens went for compatriot Shane Williams.

"He's a small guy, but he had such skill," he says. "When you were reffing the game and he got the ball, you felt this whoosh of anticipation - what's going to happen next? Bryan Habana was another one like that."

popular
Musa Yamak dead at 38: Unbeaten boxer suffers heart attack in ring and collapses
Johnny Depp reacts after Amber Heard’s lawyer impersonates his voice in court
Detective spots key clues in Johnny Depp and Amber Heard's body language during trial
Thomas Tuchel reveals Andreas Christensen has pulled out of several matches this season
Amber Heard denies assaulting ex-girlfriend in tense exchange with Johnny Depp's lawyer
Court shown private elevator moment between Amber Heard and James Franco
'Blood rain' and lightning is set to sweep across the UK this week
You may also like
Sport
'Oh my good gosh, this is freakish!' - English rugby's next speed demon
Sport
'He's got an aura about him' - Big calls as Kyle Sinckler selects his 'Ultimate Pack'
Sport
Chris Ashton on his post-match apology to Ireland star James Lowe
Sport
"I love living here" - Trojans RFC and one of the world's most scenic places to play rugby
Sport
"You are talking like we were blown away" - Ellis Genge bristles after Leinster loss
Next Page