It is a jersey that means so much to Manchester United fans, and Alex Ferguson was well aware of its power and mystique.

END_OF_DOCUMENT_TOKEN_TO_BE_REPLACED

In football, jersey numbers generally live on and new players either live up to the challenge or move on.

For United, the number 7 jersey is associated with everything good, compelling and great about the club. Made famous by George Best, Bryan Robson and Eric Cantona went on to grace '7' during their time at Old Trafford.

In Roy Keane's autobiography 'The Second Half', ghosted by Roddy Doyle, he recalled when Ferguson called him in to discuss jersey numbers and captaincy.

'The captaincy is important," he wrote, 'but squad numbers can have an importance, too. At United, 7 was the iconic number. When Eric Cantona left there was debate about who was going to be the next captain. I was quite relaxed about it. But there was his number, too – 7.

'Bryan Robson had had it before Cantona and, of course, it went back to Georgie Best. The manager pulled me into his office and said that he wanted me to wear the ‘7’.

'Becks got it, and it suited him – and Cantona. Ronaldo had it after Becks.' 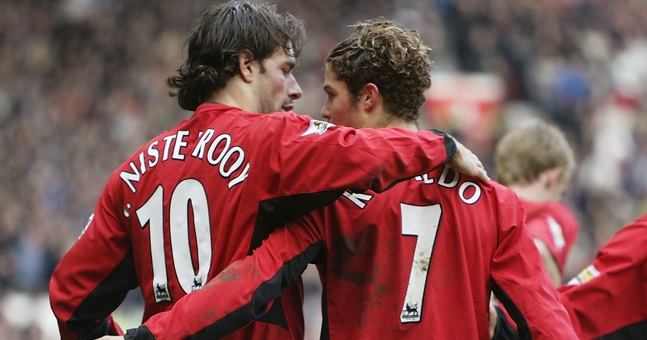 END_OF_DOCUMENT_TOKEN_TO_BE_REPLACED

Beckham inherited the number from Robson and Cristiano Ronaldo [above] took it when Beckham departed the club. When Ronaldo left United, in 2011, Ferguson sought to find a suitable wearer of the famous jersey.

United got £80m for Ronaldo but did not spend wildly that summer, bringing in Antonio Valencia, Gabriel Obertan, Mame Biram Diouf and, on a free transfer, Michael Owen.

END_OF_DOCUMENT_TOKEN_TO_BE_REPLACED

Owen, who had finished up his contract with Newcastle United, was 29 and had scored 40 goals in 89 England appearances but had been struggling with injuries. United already had Wayne Rooney and Dimitar Berbatov on their books, so Owen was looked upon as a risk worth taking.

Owen's story on how he ended up with the iconic jersey says a lot about his own confidence and just how shrewd Ferguson could be. Owen tells us:

"That's an interesting one. Valencia had been offered number 7 but he didn't want it, so to speak. He didn't want the added pressure.

"Sir Alex called myself and Michael Carrick into his office. He says, 'The number 7, Michael, I want you to wear it. I think you can handle the pressure and all that comes with it'.

"He then nods at Carrick and says, 'If you don't want it, Michael you can have it'.

Owen may well have hesitated about taking on the 7 jersey but, with Carrick in the room and the chance not on the table for long, Owen grabbed it.

The forward stayed three seasons at United and scored 17 goals in 52 appearances, many of them coming off the bench. He won a league title and League Cup with United before moving on to Stoke.

After Owen, the United 7 jersey went to the more settled Valencia before Angel Di Maria and Memphis Depay got to don it. It currently sits on the Chilean back of Alexis Sanchez.

Owen was in Dublin on Sunday to attend an exclusive event hosted by Cadbury, ‘Official Snack Partner’ to the Premier League. Hosted in The Chocolate Factory, Owen was joined by Supervalu and Centra competition winners from all over the country as they enjoyed a meet and greet with the football legend along with a questions and answers session and enjoyed a live Premier League game. The 2017/18 season marked the first year of Cadbury’s three-year partnership.