An 11-try salvo from the British & Irish Lions did for a Sharks team that were going well until they picked up a silly red card.

END_OF_DOCUMENT_TOKEN_TO_BE_REPLACED

The Lions and Sharks were level at 26-26 at half-time, but a red card for Jaden Hendrikse left his side a huge disadvantage. Our full Lions ratings reflect five players that helped their Test chances.

The Sharks were looking to show some fight after conceding eight tries in their midweek game against the tourists. They showed a lot of fight, but Hendrikse went over the line with an elbow on Liam Williams. 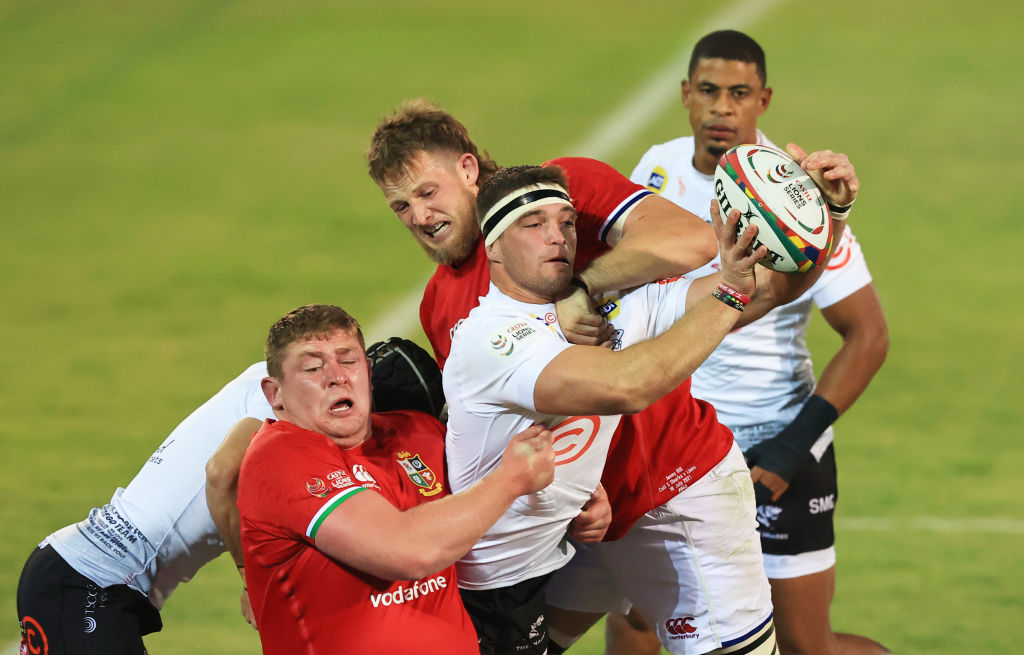 There were braces of tries for Jamie George, Tadhg Beirne and Anthony Watson, with the Lions bench making a big difference in the final 30 minutes.

END_OF_DOCUMENT_TOKEN_TO_BE_REPLACED

Two try assists and superb in the air, but some questionable moments in defence, including getting caught out of position for the Sharks' second score.

END_OF_DOCUMENT_TOKEN_TO_BE_REPLACED

Made one strong break up his wing in the first half and was assured in the high ball. Will be happy to have got over for his try, on 60 minutes, after coming inside for the ball. Teed up Curry for a try on one break but went his own way, for his second try, right at the death.

Recovered from an absolute horror show pass that led to the Sharks' try, for Volmik. Seemed to be juggling the ball on a few occasions out there. When he got hold of it, he prospered - making 69 metres off six carries. However, missed three of his seven tackles. Local broadcasters gave him Man of the Match, so maybe they saw more from him than we did.

Continues to play well on this tour. Got over for an early try and carried well for his side. His biggest blot were the three missed tackles on his stat-sheet.

Pressing hard for a Test spot in the back three. Lovely line and offload to tee up Harris for his score, and cruised in for one of his own. Made 128 metres off his 11 carries. Threw one offload into touch and another loose pass led to a Sharks try.

Mostly good from Biggar, but a few errors sprinkled into his performance that he will need to cut out. Ran a lovely line to set up a van der Merwe try and some of his skip passes put the Sharks in trouble. One loose pass gifted the Sharks a first half try. Set up Watson's try with an inside pass.

Did not convince that he should be the Test No.9. Had a box-kick charged down, early on, and was turned over in his 22 before Abrahams' try. Then gift-wrapped a try to Hendrikse with a telegraphed, looping pass that was intercepted.

Mixed bag for the scot. Knocked on twice in the space of 90 seconds [but the second one was due to a poor pass]. Then made up for it an an ensuing scrum with a penalty win for his side. A strong ball-carrier.

The lineout is humming with George throwing the darts. One rolling maul with George at the vanguard was shunted out, but he got over the line soon after.

Seven hard carries for Furlong but without much change. Caught out by a couple of the pacy Sharks backs. Scrummaged very well.

Gave away an early penalty as he was too slow to roll away. Happy to scrap it out and take those close-in carries.

Not a good outing for the Exeter lock. Fell off too many tackles and was outmuscled at the breakdown a few times. Did not make much impact with his carries but scrummaged well, so don't underestimate that.

Not as much of a breakdown nuisance as usual, but did some damage in broken play. Ghosted over for a try, just before half-time, helped heave Conan over the line for his score. Then his strong carry punched a hole that George took advantage of. Helped himself to a second try, on 62 minutes. Secured a huge turnover in the closing stages.

Such a pocket rocket. Always fights and scraps for that extra yard or two, and a hard man to pin down. Played scrumhalf to tee up George for his second try.

Missed one ruck that cost his team, and Hendrikse harried him off the back of one scrum, but got through a lot of work. Made 14 carries and stuck nine tackles, with a try coming not long before he was swapped for Simmonds.

Flung a long pass to Williams, instead of waiting for a lineout. Led to the Daly try. Box-kick was charged down, leading to a Werner Kok try, moments after. Sim-binned for the closing stages.

Showed his wheels to support Watson well and romp in a nice try.

popular
Incredible case of the only known individual whose parents were two different species
Time traveller’ claims to know exact date Queen will die
TikTokers are utterly convinced there is a secret zombie apocalypse going on in China right now
Women need to be dating men 10 years older than them, says relationship coach
Jealous man glued wife's vagina shut as he caught her cheating with four men
The Gambia tells UK grandmothers to find their toy boys from somewhere else
Darius Danesh opened up about his health struggles before his tragic death aged 41
You may also like
Sport
Springboks star Faf de Klerk knocked out after horror collision with All Blacks winger
Sport
"He’s shown true courage" - Wallabies captain Michael Hooper backed for brave mental health decision
Sport
New Zealand has unearthed a rugby star that is a breath of fresh air for the sport
News
Rugby club leads tributes to 'nicest lads you could find' after horror crash claims three lives
Sport
Four England stars make final cut in 'World Class' squad selection
Next Page