It was a monumental victory that could go a long way to deciding the fates of the respective European Championship hopefuls...

For Iceland especially it was tremendous feat to overcome Holland 0-1 on Dutch soil, and guarantee themselves at least a play-off spot. 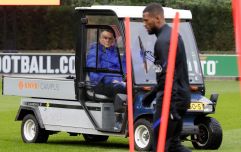 END_OF_DOCUMENT_TOKEN_TO_BE_REPLACED

If they were to make France 2016, it would be the first major international tournament in their history. So you'd expect them to celebrate like crazy.

And they do...eventually. A bizarre video shows the team stood around sedately in the changing room, occasionally shushing each other, before eventually going absolutely mental. And then stopping.

Their wild celebrations go on for a solid 10 seconds before they calm down and get on with life...

popular
Scotland international rugby star Siobhan Cattigan dies aged 26
Woman wins millions after suing mum's GP for allowing her to be born
A definitive ranking of every swear word from worst to best
Elon Musk shares 'evidence' we are actually living in a simulation
Here's how to see who's been taking screenshots of your Instagram Stories
Nasa warns 'concerning' asteroid will break into Earth's orbit in a week
Omicron symptoms: What you should be looking out for
You may also like
Sport
Dutch youngster Mohamed Ihattaren 'considering retiring' due to depression
Sport
Virgil van Dijk pushes fan who storms him for a selfie during interview
News
At least 21 dead and dozens missing as floods rip through Germany
Sport
Dutch crash out to Czech Republic after disastrous 25-second spell
Sport
Uefa reportedly ban rainbow flags ahead of last-16 game in Budapest
Next Page