The Professional Darts Corporation shared two images on Twitter that show how different this year's World Darts Championship is to last year's. The first image shows a hearty stack of kegs filled with beer, ready to be poured down thirsty darts fans' throats.

The second shows a very meagre offering, reflecting the dramatically lessened attendance at this year's tournament.

Exhibit A: Loads of pints

Exhibit B: Not as many pints 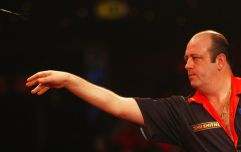 END_OF_DOCUMENT_TOKEN_TO_BE_REPLACED

Crowds at Alexandra Palace have been massively reduced in order to put in proper social distancing measures.

While the WDC is usually known for its rowdy crowd of fans piled into benches dressed up in their finest fancy dress, the opening day of darts saw fans reduced to tables of four, spaced across the venue's spacious main hall, with approximately 500 in attendance.

And now that London has been placed into tier 3 - the highest level of Covid restrictions short of a national lockdown - there will be no fans in attendance for the foreseeable future.

The current tiers in England have been reviewed by the government, but given London's high infection rate, it's unlikely to go back into tier 2 soon.

Speaking to Online Darts, PDC Chief Executive Matt Porter said the lack of fans has been more than a spanner in the works: "It’s a great big sledgehammer going through the middle of them

“It would take a brave man to do that to London a week before Christmas, or any other city. But this government have been nothing but consistent in making decisions that have raised eyebrows.

“If we can’t let people in, we’ll still stage the event at Alexandra Palace without a crowd and we’ll make it as good as we can do.”