Sunday's rugby union match between England and Barbarians has been called off, after 12 Barbarians players broke Covid protocol

Former England captain Chris Robshaw is believed to be amongst the Barbarians players who left the team's London hotel on Wednesday night, to go to dinner at a restaurant.

The Rugby Football Union confirmed that the players had compromised the "bubble environment" designed to control the virus.

The 12 players were stood down, and Barbarians were given until 3pm on Friday to find replacements. They failed to do so, and now the Quilter Cup match has been called off completely.

Richard Wigglesworth, Sean Maitland and Jackson Wray were amongst those who were stood down.

"We are incredibly disappointed to be calling a halt to this fixture," said RFU chief executive Bill Sweeney. "We know how much fans were looking forward to seeing the teams play."

"However, our priority is to protect the health and safety of the England squad and the other international teams they will go up against this autumn."

"There has been a great deal of effort put into Covid codes of conduct and planning for games, including cooperation with Premiership clubs to release additional players to fulfil the fixture safely," Sweeny continued.

"We are all incredibly frustrated and disappointed that the actions of a number of Barbarians players mean we no longer feel it is safe for the game to go ahead."

.@EnglandRugby are now assessing whether the #QuilterCup can happen & we’re working with them to do everything we can to make this possible.

We’re proud of those players who acted responsibly showing an understanding of the importance of getting #rugby back for fans. #Baabaas 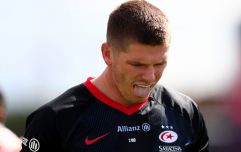 END_OF_DOCUMENT_TOKEN_TO_BE_REPLACED

In a tweet on Thursday, Barbarians FC said they were "extremely disappointed in the actions of the players involved & do not in any way condone their conduct."

They also praised those who remained in the bubble, saying; "We’re proud of those players who acted responsibly showing an understanding of the importance of getting rugby back for fans."