He's over in the autumn.

International superstar Khalid has a date with the UK - five, to be precise. 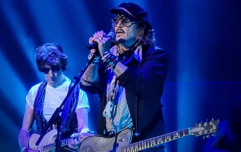 END_OF_DOCUMENT_TOKEN_TO_BE_REPLACED

Having just dropped new album Free Spirit, the 21-year-old has a European tour in his sights, with big shows in London, Leeds, Birmingham, Glasgow and Belfast pencilled in.

The man born Khalid Donnel Robinson will take to the stage at London's O2 Arena on September 17 and the SSE Hydro in Glasgow on September 20, Resorts World Arena Birmingham to following evening, Leeds' First Direct Arena the night after and the SSE Arena Belfast on Wednesday 25 September.

Special guests will come in the form of Mabel and Raye.

Tickets go on sale this Friday 12 April at 10am via Ticketmaster and usual outlets nationwide.

popular
Incredible case of the only known individual whose parents were two different species
Cyclists may have to get number plates under radical shake-up of road laws
Darius Danesh opened up about his health struggles before his tragic death aged 41
Alec Baldwin: 'Everybody who was there knows exactly who’s to blame' for Halyna Hutchins' death
TikTokers are utterly convinced there is a secret zombie apocalypse going on in China right now
Darius Danesh pictured with Gerard Butler before his death
Pop Idol star Darius Danesh found dead aged 41
You may also like
Entertainment
Britpop icons Pulp to reform for 2023 shows
Entertainment
Pink Floyd's Roger Waters declares 'I'm far, far, far more important' than Drake and The Weeknd
Entertainment
Fans lose it as Johnny Depp reunites with his iconic lawyer Camille Vasquez
Entertainment
Billie Eilish confesses to using body double for Coachella festival set
Music
The Magic Gang have no tricks up their sleeve, just great chorus after great chorus
Next Page