Claiming that a combination of drunks, drug addicts and Syrian refugees has turned the resort into a 'cesspit of awfulness and disease', Clarkson writes in his weekly column for The Sunday Times that the solution to the town's problems would be to turn it into a gas fracking centre.

Believing the town should make the most of its 'geological good fortune', Clarkson appears bemused that anti-frackers aren't exploiting the fact that the town sits on 'rocks full of gas'. 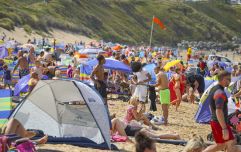 END_OF_DOCUMENT_TOKEN_TO_BE_REPLACED

But it's his description of some of the town's inhabitants that has raised eyebrows.

Describing some of the people living there as 'not what you'd call house-proud', he then states that most were 'enthusiastic users of heroin or Stella Artois.'

In relation to refugees that have arrived in the town, Clarkson writes: "You couldn't help thinking: 'How bad was your life in Syria for this to be better."

popular
Two British men raped in Spain after being 'drugged while out on night out'
Groom shocks wedding by playing video of his bride cheating with her brother-in-law
Man has hand 'chopped off' outside working men's club in attack like 'a horror film'
Brit tourist, 22, ‘raped by wealthy American holidaymaker in hotel toilet’ in Mykonos
Runner finishes last in 400m race as penis keeps falling out of shorts
British woman who told Dubai police she'd been raped is arrested for extra-marital sex
Some Stranger Things fans are now trying to cancel Metallica
You may also like
Entertainment
Investigation opened up into Jeremy Clarkson's new restaurant - after he found a 'delightful little loophole’ to open it
Entertainment
Jeremy Clarkson responds after being slammed over ‘exceptionally stupid’ heatwave tweet
News
Jeremy Clarkson is scared people will turn to cannibalism as food shortages sweep the world
Sport
Team Haas leader defends Nikita Mazepin following Jeremy Clarkson comments
Entertainment
Jeremy Clarkson threatened with legal action by YouTuber over trademark catchphrase
Next Page