Wilder has been suspended until April 8

Deontay Wilder has been handed a six-month suspension after his knockout defeat to Tyson Fury on Saturday. 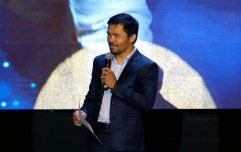 END_OF_DOCUMENT_TOKEN_TO_BE_REPLACED

Wilder was taken to hospital to be checked over after the fight and it has been reported that he is set to undergo surgery on a broken hand.

According to reports, the Nevada State Athletic Commission has suspended him until April 8, unless he is cleared by a doctor beforehand.

Fury, who knocked Wilder down three times on his way to victory in their trilogy fight, has been handed the standard 45-day suspension following his victory which was his first-ever world heavyweight title defence.

His victory ended a ring rivalry that had raged for almost three years.