The protestors have been clear in their aims

Four days after a Religious Education teacher at Batley Grammar showed a caricature of the Prophet Muhammad to a class, parents are still protesting outside the school, calling for his sacking.

END_OF_DOCUMENT_TOKEN_TO_BE_REPLACED

Any image of Allah or Muhammad is deemed to be an insult against Islam, and the teacher showing the image to his class has sparked huge anger amongst parents. It is believed that the teacher was attempting to teach the class about blasphemy.

According to the Independent around 30 men and teenagers spent the morning outside the school on Friday. Despite the head teacher of the school having already issued an apology and the teacher himself being suspended, the protestors are demanding that his punishment is more severe.

Some have demanded that he "should never teach again" and that they will  "keep protesting until that happens."

The protests resulted in the school being kept shut on Friday with some reports claiming the teacher is under police protection. 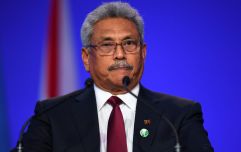 END_OF_DOCUMENT_TOKEN_TO_BE_REPLACED

Headteacher of the school Gary Kibble has already issued an apology and has promised an investigation in the matter. In Mr Kibble's statement he also said that the member of staff concerned has "relayed their most sincere apologies."

Meanwhile a petition claiming to have been set up by a student from the school is calling for the teacher to remain in his role, and has gathered over 40,000 signatures. It says that the teacher "was trying to educate students about racism and blasphemy. He warned the students before showing the images and he had the intent to educate them. He does not deserve such large repercussions. He is not racist and did not support the Islamophobic cartoons in any manner."

Officials at the school will be hoping that the upcoming Easter holidays will ease some of the tension and calm the situation down.