A brilliant example of Twitter being used for good

Stories like this help support the theory - widely shared in the JOE office - that most people are fundamentally good eggs.

Last Friday, Liverpudlian Fiona Hodge tweeted out a request to help her stepson Ben, who has Down’s Syndrome, find some paid work in the catering industry.

Won't someone in the Liverpool area give my step son, Ben, who has Down's Syndrome a chance at a paid job? Motivated with NVQ 2 in catering

Her plea rapidly gained momentum as thousands of people began to tweet out her appeal using the tag #GiveBenAJob.

Hope all you pubs, restaurants, eateries in Liverpool have taken a look at #GiveBenAJob @stuwystv — LGBT Lawyer (@Lgbt_lawyer) March 17, 2015 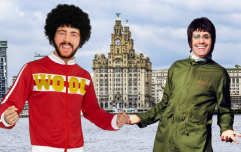 Teaching Scouse to a Mancunian

END_OF_DOCUMENT_TOKEN_TO_BE_REPLACED

Speaking to the media as the story took off, Fiona said that Ben had worked for “big chains like McDonald’s and Wetherspoons in the past”, but sadly had never managed to secure a full-time role.

She said: “He has a level two NVQ in catering and would love to be a baker – but in fairness he’d do any job.”

Brilliantly, the campaign appears to have worked, as his mum says there are currently “lots of possibilities” with local catering businesses, the Liverpool Royal Hospital and a school for autism nearby.

This is ace. As others have pointed out, Ben is not the only person to be struggling for work because of a disability, but it’s heartwarming to know that communities can club together and help out those in need.