Guy quits $100,000 a year job to work for Logan Paul and then gets rejected

Could Logan Paul have handled it better?

Logan Paul might have delivered his biggest blow yet, by crushing the dreams of a young man who hoped to work for him.

END_OF_DOCUMENT_TOKEN_TO_BE_REPLACED

Austin Wallace, a 22-year-old from Ohio, allegedly quit his $100,000 per year job in the hopes of working with the YouTube star turned boxer. But it did not go well.

Wallace ended up in tears in his car after confronting Paul backstage at the Jake Paul vs Tyson Woodley fight over the weekend.

In a video shared to his TikTok account @aj_wallace69 Wallace is visibly upset.

END_OF_DOCUMENT_TOKEN_TO_BE_REPLACED

"I don't know what to do. I did come up here by myself, I do have family but we're not the closest, and I don't have really close friends. You know there's millions of people trying to do what I wanna do. Just watch the clip."

The TikTok then cuts to a clip of his talk with Paul, which isn't easy to watch, unless you like seeing people's dreams blow up in their face.

"What are you good at?" Paul asks Wallace, to which he essentially concedes, not much.

"Then why would I give you a job?" Paul asks.

@aj_wallace69Well here’s the end result with Jake’s brother Idk what to do at this point.♬ original sound - Austin Wallace 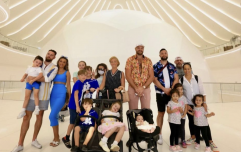 END_OF_DOCUMENT_TOKEN_TO_BE_REPLACED

Paul continued: "I can't be a mentor right now.

"I didn't have connections or people around me, I had Jake. Do you have a brother? Do you have friends?

"You're a good-looking guy. You have friends, bro. You're f***ing lying.

"Go make content, make stuff with your friends. I'm glad you quit your job, it takes balls to do that, but now you gotta activate.

"If you really are serious about it, you should move to LA and just like you approached me, start making connections with every single person in LA.

"I'm serious, that's it. I've always said, if you can talk to someone, you can make it in LA."

The video is painful to watch, mostly because Paul himself is relatively self-made so has some special knowledge in 'making it'.

Though, Paul did rise to fame in an era that wasn't saturated with every person and their granny trying to go viral.

Hopefully, Wallace can get his job back, or at least use that dollar to move to LA.

popular
Bette Midler wants the US to ban Viagra because it’s ‘God’s will’ to have a ‘limp d**k’
Travis Barker’s daughter shares picture of Blink-182 star in hospital bed - tells fans to ‘send your prayers’
British teen says she was raped in Majorca hotel by 'famous actor and musician'
Police hunt for two 'laughing' men who kissed three-year-old girl in front of distressed mum
Father takes his own life after 18-month-old found dead in hot car
Jasmine Burkitt death: BBC reality TV star dies aged 28
'You're disgusting': Prince William roars at photographer who was 'stalking' his family
You may also like
Sport
Jake Paul responds after Tommy Fury confirms he was denied entry to US
Sport
Tommy Fury denied entry to US ahead of Jake Paul press conference
Sport
Jake Paul hits back at Tyson Fury's X-rated 'p****' chant with 'Beethoven' jibe
Sport
Anthony Joshua says he will be a "boxing legend" if he wins Usyk rematch
Sport
Tyson Fury's father reveals that he and his son are banned from travelling to America
Next Page