Dozens of people in San Diego, California have helped themselves to handfuls of free money after an armoured truck carrying heaps of notes dropped a bag of cash onto a busy highway. 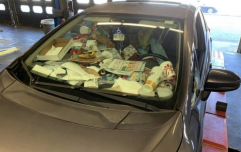 END_OF_DOCUMENT_TOKEN_TO_BE_REPLACED

Fitness influencer and one of many lucky buggers to be in the right place at the right time, Demi Bagby (the surname being very fitting in this situation), shared footage of the mass cash-grab to her Instagram.

You can see the whole road come to a standstill as people leave their vehicles to swipe up as much precious paper as they can:

According to ABC10 News San Diego, the armoured truck was spotted heading towards the Federal Reserve from a local bank around 9am on Friday and is thought to have dropped two bags of money after a door popped open.

Naturally, as the cash scattered across virtually every lane of the highway, cars came to a screeching halt and caused a massive backup on the route while the drivers made the most of the good fortune. The truck driver himself was thought to have tried to recover as much cash as he could but it was simply impossible amidst the scramble.

Two people are believed to have been arrested for picking up the cash and were then unfortunate enough to lock their car doors and be picked up by police later. California Highway Patrol said people could be prosecuted for taking the cash and not returning it.

Anyone who took money from the scene is urged to return it within 48 hours or call 858-637-3800 to return it if they want to avoid potential criminal charges. The FBI is also thought to be investigating the incident.

popular
Woman left mortified after realising why postman ‘rudely’ chucked parcel through door
Woman horrified to find shop employee scrolling through her intimate photos for 15 minutes
Here's how to see who's been taking screenshots of your Instagram Stories
Jamie Carragher and Roy Keane clash over Cristiano Ronaldo's role at Man Utd
Roy Keane cracks up Carragher and Hasselbaink with league title joke
Evra bizarrely congratulates Messi for winning Ballon d'Or, despite winner not being announced
Face masks to be compulsory in England from Tuesday
You may also like
News
Plane flying ‘will you marry me’ banner crashes, killing passenger
Tech
Mark Zuckerberg slammed for his apology on social media blackout
Sport
Verstappen and Hamilton take each other out in Monza GP after dangerous collision
News
Mum Snapchats herself hitting M60 at 88mph - has horrific crash
News
The woman who caused Tour de France crash will be sued once caught
Next Page