In what sounds like a plot from a Phoenix Wright: Ace Attorney DS game, Nintendo is being sued by an actual child (and his mother, to be fair).

It is all based around so-called Joy-Con drift. The Joy-Con is the Nintendo Switch controller, and there is the unfortunate phenomenon of the controller thinking the thumbstick is being pushed, when in fact no one is touching it. As you might expect, it severely hinders your ability to play games properly and is already the subject of a class-action lawsuit.

Now Wired is reporting that a Northern Californian woman named Luz Sanchez and her son, who is 9 or 10 years old, have filed another lawsuit against the gaming giant. Her son is named as 'M.S.' in the court documents and listed as a minor.

In Decmeber 2018, when her son was eight, Sanchez bought him a Switch. Within a month the controllers started acting up, they allege. According to the court documents, "the Joy-Con drift became so pronounced that the controllers became inoperable for general gameplay use."

Sanchez says she also bought another set of controllers, but after seven months the same thing happened. 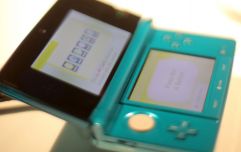 QUIZ: Can you name the Nintendo DS game from the screenshot?

END_OF_DOCUMENT_TOKEN_TO_BE_REPLACED

The plantiffs are seeking over $5 million in damages from this lawsuit. In their suit, Sanchez's lawyers have argued that Nintendo "has had a financial motive to conceal the defect, as it did not want to stop selling the Products, and/or would need to expend a significant amount of money to cure the defect."

Joy-Con drift has been a recurring problem amongst Nintendo fans, at least anecdotally. A lawsuit from 2019 is still continuing and searching for more claimants. Nintendo had offered free out of warranty Joy-Con repairs, but this was rejected by lawyers who claim that Nintendo "continues to market and sell the products with full knowledge of the defect and without disclosing the Joy-Con Drift defect to consumers in its marketing, promotion, or packaging."